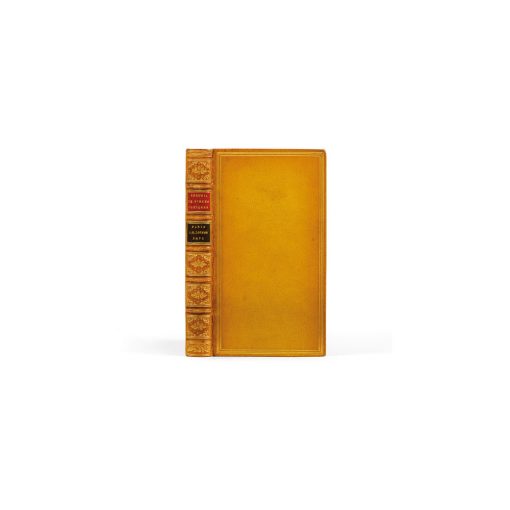 Rare edition
of this “uncommon collection of short stories in prose”
by Préfontaine (Willems)
appended to the Elzevirian collection.

The precious copy of Solar and Léon Rattier mentioned by Willems and Gay.

Rare edition of this “uncommon collection of short stories in prose” by Préfontaine (Willems) appended to the Elzevirian collection.

“This volume printed in small characters is very facetious and entertaining. It is so rare that we haven’t seen it listed in any sale. Bérard doesn’t mention it in his book on the Elzeviers.” (Gay, mentioning our copy: “Solar, 148 fr.”)

“By teasing Gallien’s disciples, Molière only followed the burlesque tradition.

The curious narrative that we are about to read belongs to this tradition. It is in relation to the verbose productions of Boccaccio, Marguerite de Navarre, Cervantes and Rabelais. For, next to these childish gibes of which the author abuses in order to poison the so-called poisoners, we can appreciate the finesse and sharpness of some episodes which reveal the mores of the time and the psychology of the fanfaron, the scholar, the adventurer, the banker, the lawman, all by him rudely mocked. (…)

“The books of sieur de Préfontaine were not made for the society of the Précieuses and testified to the kind of life lead by the author. He was the son or nephew of César Oudin, the translator of don Quixote ; he was acquainted with the literature of Italy and Spain; we can see that he tried to imitate Cervantes and that he voluntarily chose his characters in the abject and scorned social classes, where the bandit and the wanton girl are always holding hands. He lived, or had lived, among this simple folk that he liked to portray in some ignoble cabaret or other forsaken place. But it was not for the local people that he exposed these trivial and shameful tableaus, which deserve to be exposed in our pornographic gallery.

“César François Oudin sieur de Préfontaine, an erudite linguist and lexicographer, mastered several languages, especially Spanish; he had drawn from the books by Quevedo and other burlesque Spanish authors a caustic gaiety that he spread with enthusiasm in his own texts; furthermore, he contributed to the facetious genre with a spicy originality, and he filled his descriptions or portraits with the liveliest and most animated colors. We know nothing of this author’s life; but from the topics he chose, we can surmise that he lead a life of gambling, wine and women. His younger brother had been the Italian tutor of Louis XIV but the author himself was unable to extract himself from the mud hole of bad mores he was stuck in and no one went to look for him in the taverns he frequented. But “man falls and the book stays”. Oudin de Préfontaine’s works were frequently re-printed and they belong in the forefront of the Gallic monuments of bawdy and comic literature.” (P. L., Bulletin du bibliophile, Janvier 1858, XIII, n°436).

Grente notes that Préfontaine might have been in the service of Madame de Sévigné and that several of his novels deserved to be re-printed.

A copy preserved in its elegant lemon morocco binding by Trautz-Bauzonnet.