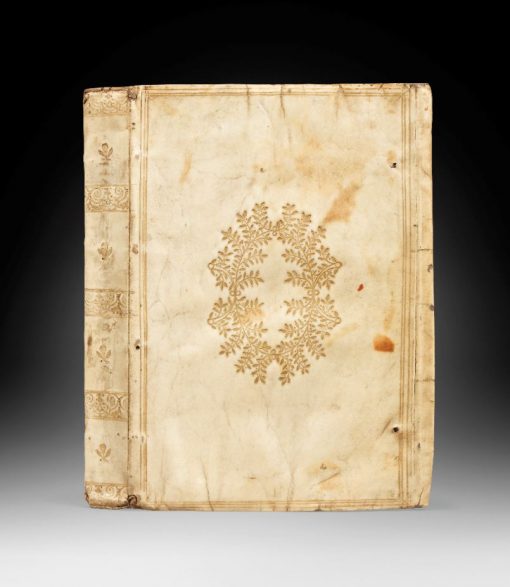 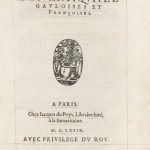 the humanist who tread where no one had gone before

and opened the way to the history of literature

as it is conceived today” (Alain Cullière).

First edition of “two major works by Claude Fauchet, the historian of French Letters, the humanist who treaded where no one had gone before and opened the way to the history of literature as it is conceived today.” (Alain Cullière)

Claude Fauchet, historian of national antiquities and French Letters, was linked his whole life to the world of Parliament. His humanist education was completed by a trip to Italy between 1550 and 1555. The young Fauchet discovered Rome and Venice, to his utter amazement ; his taste for archeology and history was thus reinforced. Furthermore, Dante’s De vulgari eloquentia and his friendship with the scholar Sperone Speroni awakened in him an interest for linguistics.

Upon his return in France, Fauchet sought to settle. He started as a lawyer for Parliament and was later appointed as an advisor at the Châtelet. In 1568, he was employed at the Cour des Monnaies and later became one of its first presidents, a charge he held up until 1599.

Parallel to this prestigious career as a magistrate, Fauchet also lead the life, equally brilliant, of a scientist. His first publications on history and literature are from 1555. Among his familiars were Jacques Gohory, François Perrot, and then Antoine de Baïf, Jean Bodin, Estienne Pasquier, Antoine Loisel, Jules César Scaliger and Pierre Pithou. His whole life, Fauchet kept in touch with the most learned of his contemporaries. His erudition was often solicited and the prestige of his book collection, already famous in 1576, only heightened his own. In 1586, when Henri III gave Claude Fauchet his letters of nobility, he intended to reward as much the magistrate as the erudite who had already distinguished himself through the publication of several works.”

Fauchet fervently defended the rights of the crown and the Church of France in the power struggle against the pope. He wrote a scathing indictment of the papacy which he accused of having divided the European nations in order to better expand its power on the “affairs of the world”.

In his treaty, the historian reaffirms the independence of the Gallican church whose only “earthly chief” is the king of France. Such nationalistic sentiment also appears in the Recueil de l’origine de la langue et poésie Francoise that Fauchet says to have written for the “glory of the French name”. In the first part of his book, the humanist broaches the question, often debated during the Renaissance, of the French language’s origins. Fauchet distinguishes himself from his contemporaries because of the importance he gives to historical and sociological factors in his interpretation of linguistic evolutions.

However, it is in the second part of his work that Fauchet appears his most innovative.

By listing the literary notices of 127 “Poètes et rymeurs François, vivans avant l’an MCCC”, the humanist treaded where no one had gone before and opened the way to the history of literature as it is conceived today.

For every author, Fauchet gives a brief biography, a list of all the known works and quotes from the manuscripts he owns or to which he managed to have access.

But his approach is always historical. Of the passages he chooses to quote, Fauchet prefers those that speak to medieval mores and customs, offer the description of a town or battle, or explain something that has remained obscure concerning the past of the country’s institutions.

More than forty years of labor went into these “Annales de France” that retrace the nation’s history, from its Gallic origins to the decline of the house of Charlemagne.

The wars of religion were very hard on the historian. During the conflicts, Fauchet was forced on several occasion to seek refuge in the countryside ; the manuscript of his Antiquitez was stolen, his house and library pilfered.

With his Antiquitez, Fauchet wanted to give France the history of its origins that it seemed to lack.

Due to his great scholarly qualities and rigorous method, Fauchet was one of the most active players, with Estienne Pasquier and Henri Lancelot de La Popelinière, of the rebirth of French historiography in the middle of the 16th century.

Furthermore, his interest, which he shared with his friend Pierre Pithou, for the research and dissemination of the “escrits du temps” foreshadows the collections of French historians published, the following century, by André du Chesne and, in the 18th century, by the congregation of the Benedicts of Saint-Maur. Fauchet’s work, whose unity is to be found in the fervent national sentiment that animates it, is that of a pioneer, “not unlike, says his last biographer, the Gaston Paris and Paul Meyers and historians like Augustin Thierry himself”. (J-G.Espiner-Scott)

A superb copy, ruled, with an elegant contemporary gilt vellum, a condition not mentioned by the bibliographers.

Brunet lists one copy of the Antiquitez gauloises alone, bound in 19th century morocco, at the price of 80 F. Which is approximately ten times the price of an old book at the time.