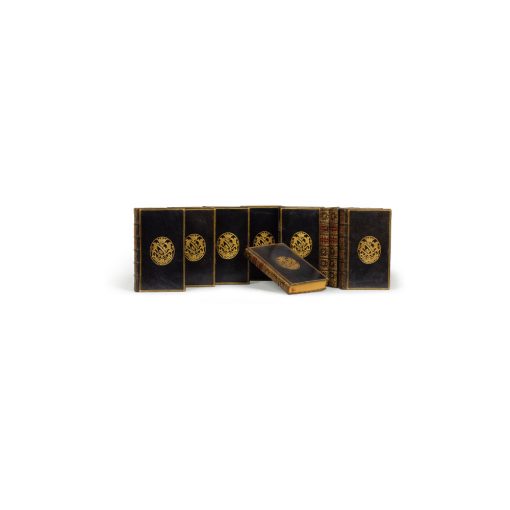 This collection reunites three first editions
of Madame de Sévigné’s Lettres.
It contains 823 letters, of which 209 were previously unpublished.

A precious copy
preserved in its contemporary dark blue morocco binding
with the arms of Jean de Boullongne (1690-1769).

It contains 823 letters, of which 209 were previously unpublished.

Parts VIII et IX are made up of the collection of the Lettres Nouvelles in a first edition, a supplement of 86 letters previously unpublished.

A daily diary of her time, the letters of Madame de Sévigné were written for the most part between 1671 et 1696.

They remain in our collective memory as the liveliest chronicles of Louis XIV’s reign.

“Maternal love is at the heart of this private correspondence between mother and daughter. These letters by Mme de Sévigné to her daughter would have apparently remained buried in the trunks where the recipient had lovingly put them if she hadn’t been Bussy-Rabutin’s cousin. Exiled in 1665 for his renowned Histoire amoureuse des Gaules, he stayed busy sharing his life and writing letters. In 1697, the Lettres de Bussy were published in 4 volumes, 2 of which contained his correspondence with his cousin: 247 letters more or less equally split. The success of the one who seemed, on his own, capable of replacing Balzac and Voiture drew the the right peaople’s attention to the marquise’s talent. Bussy’s eldest son ended up asking Mme de Simiane, Mme de Sévigné’s grand-daughter, to send him the correspondence she had just inherited from her parents. The wheels were set in motion, that would result in the 1725, 1726, 1734-1754 editions and transform the marquise into the epistolary reference.” (En français dans le texte)

Madame de Sévigné loved her daughter. Her wedding to a lieutenant from Provence caused her mother to endure a brutal and terrible separation and this is when a regular and animated correspondence between Mme de Sévigné and her daughter was born.

“It is possible to find, but very rarely, copies of these different editions bound in morocco.” (Rahir)

A precious copy bound in its contemporary uniform dark blue morocco binding with the arms of Jean de Boullongne (1690-1769).