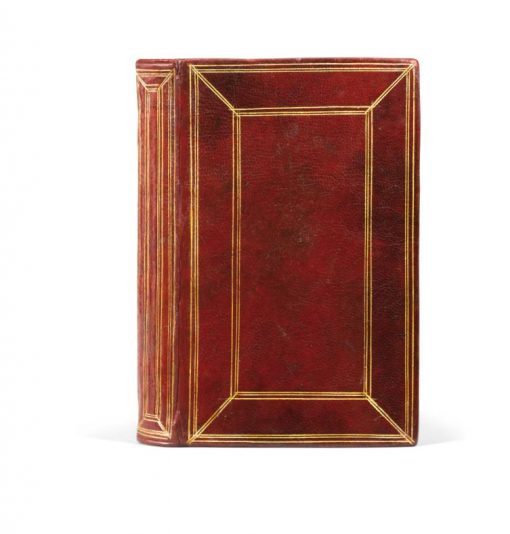 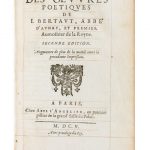 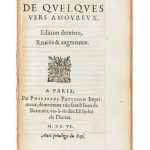 “Bertaut carved himself a particular path between Ronsard and Desportes. He is easier to understand than the first, stronger than the second and has more spirit and politeness than both of them put together”
(Melle de Scudéry).

Precious and beautiful copy preserved in its contemporary morocco.

“Complete collection of the Œuvres by Bertaut, who was one of Ronsard’ students” (Edouard Rahir).

This edition of the Œuvres poétiques “is enlarged by more than half from the previous printing. It’s the most beautiful and sought-after edition” (Catalogue De Backer).

The Recueil de quelques vers amoureux is made up of 89 plays, of which 15 were previously unpublished. This edition is the only one that came out of the presses of Philippe Patisson, son of Mamert Patisson. It was published anonymously.

At 16, Jean Bertaut (1552-1611) discovers the works of the head of the Pléiade and of Desportes. His passion is born and they both encouraged the young poet. Desportes introduced Bertaut at court and remained his faithful lifelong friend.

Appointed by Henri III to be the preceptor of the count of Angoulême, Charles IX’s biological son, and later, from 1557 to 1589, secretary to the king’s cabinet, he quickly became the in-house poet, composing for each event melodious verses where hints of a natural but charming melancholy surface.

“So much effort and hard work deserved a reward and Bertaut received more than his due largely because he was always, wisely, on the side of the winner — which called for some flexibility at times. In 1594, he received the abbey d’Aunay ; in 1600, he was the queen Marie de Medici’s chaplain. Strangely enough, this courtesan could always count on the friendship and esteem of the other poets who praised his noble soul and his selflessness.”

“It is rightly so that Michel Jeanneret placed Bertaut in a chapter titled “the poets’ emancipation”. They prolong the « genre of the mundane poetry, which goes from the Pléiade to Desportes, while still working around Malherbe, but with less zeal, on the advent of an estheticism that announces the Classics”. For his part, Robert Sabatier is one of those who were sensitive to the poet’s “Lamartinian lyricism”. “His rational poetry, which cannot be mistaken for Desportes’, profoundly differs from the spontaneous, and sometimes disorganized, poetry of the previous era. His abhorrence of all excess, his refusal of the “fury” that the friends and followers of Ronsard called for with all their being, is what characterizes the chaste verses contained in this collection. The poet’s contemporaries liked them and they were adored by the next generation.” (J. P. Barbier)

“Bertaut was considered by the classical authors as a pioneer, mastering a language ahead of his time. Boileau, usually quite ferocious with the authors from the previous centuries, said of Bertaut that he « had caught the real genius of the French language”.” (N. Ducimetière).

“Bertaut carved himself a particular path between Ronsard and Desportes. He is easier to understand than the first, stronger than the second and has more spirit and politeness than both of them put together” (Melle de Scudéry).

Precious and beautiful copy preserved in its contemporary red morocco.