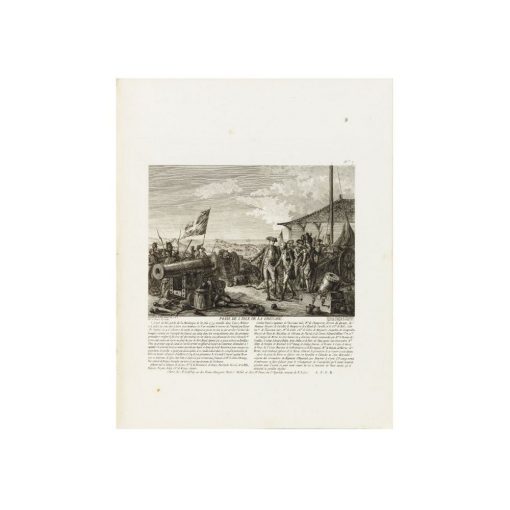 Admirable collection of engravings
on the war of Independence of the United-States of America.
“The first French book with a title-page

It is the only contemporary book on the facts
printed in France.

First edition, first issue, of this complete collection of 16 engraved plates narrating the origins and important events of the American Revolution.

First Edition of this attractive series of sixteen plates and maps of the American Revolution.

Recorded here are some of the major events of the War and of the larger global conflict between Great Britain and France, including the tarring and feathering of John Malcom at Boston, the battle of Lexington, the capitulation of Burgoyne at Saratoga, the capture of Dominica, Senegal, Grenada, Pensacola, and Tobago, the surrender of Cornwallis at Yorktown, the battle of St. Eustache, the siege of Fort S.Philippe, and the attack on Brimstomhill. There is also a general map of the United States and a composite map of the Gulf of Mexico, Barbary, Minorca, and Tobago. Below each view, forming part of the engraved surface, is brief explanatory text by Niquet. The engraved title contains a précis of the War, surmounted by five inset views of military and naval engagements, while the final plate, decorated with four similar insets, gives a précis of the Treaty of Versailles in 1783 and a list of the principal officers killed or wounded in the war.

Howes describes this as the first French book with a title-page mentioning the United States.

This extraordinary work on the war of Independence of the United-States of America is made up of beautiful frescoes (180 x 235 mm) engraved by Ponce, Godefroy, Le Barbier, Marillier… illustrating the important events of the American Revolution :

– Title engraved decorated with five vignettes of naval and terrestrial combats including the English Defeat in Louisiana and the capitulation of the du Fort de la Mobile on March 14th, 1780.

– John Malcom or the Origins of the American Revolution.

– The capture of Dominica

– The capture of Sénégal.

– The capture of Granada.

– The surrender of Cornwallis at Yorktown.

– A map of the United-States.

– A précis of the peace treaty.

It is the only contemporary book on the facts printed in France on this topic and the first French book to mention the United-States on the title-page.

A precious copy, pure, kept in its contemporary case-binding, as issued.