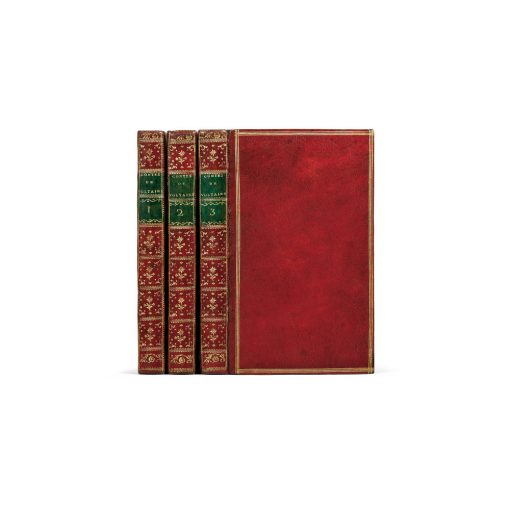 The copy belonging to the Comte Szaniecki

The first of the great editions of Voltaire’s Romans et Contes, the most beautiful, the first illustrated and the first mentioned by Cohen.

It includes, among others, Zadig, La princesse de Babylone, Micromégas, Candide, Le Huron ou l’ingénu, l’Homme aux quarante Ecu, Les Contes arabes et indiens, and is decorated with 57 etchings by Monnet, Marillier, Martini and Moreau, 13 vignettes by Monnet, 1 fleuron on the titles and 1 portrait of Voltaire engraved by Cathelin and based on La Tour.

Monnet’s most important and well-done work of the time is his illustration of 52 drawings for Voltaire’s Romans et Contes (1778), which was in such high demand.

“He put into these small paintings much invention and gaiety, and he managed to make a career out of the numerous saucy subjects he did quite well. Also, some from “Zadig”, the charming drawings for “Candide”, especially the one where Candide meets two women being chased after by monkeys, the one from the “Huron amoureux”, and finally the one from “Jenni” where the dona Boca-Vermeja receives the whip by the reverend father, are the most pleasant and well-done.” (Baron Roger Portalis. Les dessinateurs d’illustration du XVIIIè siècle)

“Voltaire held in his hands the Père Bourdaloue, and wrote an account of Marat’s first book. In his art like in his mind, he cares for the past as much as he anticipates the future.

The immense work he left us remains, despite its disparities, the testimony of an awakened spirit. His style is full of life, we enjoy feeling the presence of an admirably lucid and cultivated intelligence. To a world so different from the one he knew and wrote for, he still warns about the dangers of gullibility, about not taking lies, imposture, illusions of the heart or routine thoughts as essential truths.”

Amateurs often fight over the beautiful copies of Voltaire’s Romans et Contes if they are preserved in their old morocco; we know they are very rare in such a state and Cohen (1039) only mentions one copy bound in old morocco among the thirteen mentioned.