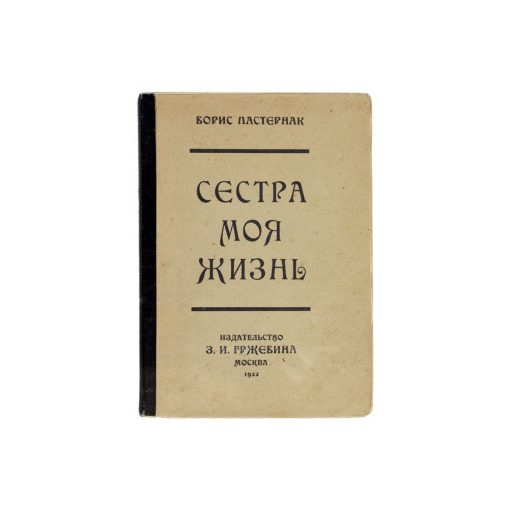 Extremely rare first edition of this collection of poems
that “will put Pasternak in the forefront of the Russian poets of this century”
(Dictionnaire des Œuvres).

Extremely rare first edition of Pasternak’s inaugural collection of poems that “will put the writer in the forefront of the Russian poets of this century”. (Dictionnaire des Œuvres, Laffont-Bompiani)

““My Sister Life” stands on its own among the crown jewels of the twentieth-century Russian literature.” (E. W. Clowes)

“It’s the publication of “My Sister Life”, and its immediate sequel, “Themes and Variations” which established Pasternak as one of the pillars of modern Russian poetry. “My Sister Life” first introduced the theme of the revolution of 1905 among Pasternak’s favorites, nature and love.” (M. Sollars)

Written during the summer of 1917, a few months before the October Revolution, and published in 1922, this collection of poems tells of the twists and turns of a passion whose main foreground is the towns and villages of the medium Volga, and whose background is the exalted atmosphere of the summer before the Revolution.

“The poems that make up “My Sister Life”, remarkable in their metric diversity, the inventiveness of their rimes and their very rich musical organization, reveal a “happiness of having a form” which the poet will later define as the “supreme form of the joy of living”, and justifies the title of the collection. This third collection is actually the one Pasternak considers to be his first mature poetic work.

“My Sister life” will be welcomed with enthusiasm by his contemporaries like Maïakovski, and will put Pasternak in the forefront of the Russian poets of this century”. (Dictionnaire des Œuvres, Laffont-Bompiani).