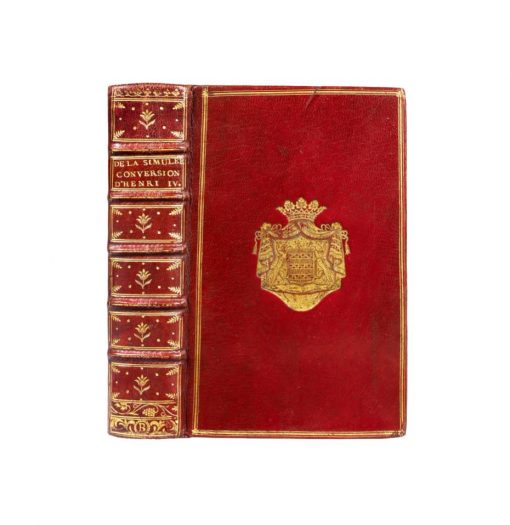 Rare first edition of these « seditious sermons »
quite sought-after by bibliophiles
« famous for being the most violent diatribes
the Ligue ever produced
» (Picot).

Henri IV ordered all copies to be burned.

Magnificent and famous copy,
luxuriously bound under the reign of Louis XIII,
and having passed through the libraries of famous collectors

Rare first edition of these « seditious sermons burned in the public square and for which the people demanded the torture of the author, whose salvation was only due to Henry IV’s clemency » (Morgand et Fatout).

“Quite rare first edition of these seditious sermons”, wrote Brunet in 1860.

“The first edition of Boucher’s sermons is much more beautiful and rare than the reprint from Douai.” (Renouard, Catalogue de la bibliothèque d’un amateur)

These nine sermons by Jean Boucher were given between the 1st and 9th of August 1593 in the Saint-Merri church of Paris, one week after the abjuration of Henri IV on Saint-Denis, on the 25th of July.

A general truce of three months had just been signed between the Ligue and the king. These sermons, approved by the Faculty, « remained famous for being the most violent and long diatribes the Ligue ever produced » (Picot, Catalogue Rothschild).

Henri IV ordered all of the copies to be burned after he entered Paris on September 15th 1594.

The theologian Jean Boucher (1548-1644) belonged to the most radical fraction of the Ligue since the Day of the Barricades of 12 May 1588.

When Henri IV settled in the capital, Jean Boucher was forced to flee. His nine Sermons against the Béarnais put a target on his back in case of retaliation.

“The “Sermons de la simulée conversion”, which are quite sought-after by bibliophiles, give the Ligue the last word ; they resume its ideas and opinions.

The faculty of theology, in its curious privilege, officially praised it erudition, its saint doctrine, its solemnity; it declared that Boucher “had admirably managed to reaffirm a fragile faith and rip off the mask of all false Catholics, of all impious policies”.

Before establishing the hypocrisy and nullity of the Béarnais’ conversion, Boucher gives a bloody portrait of Henri IV. He is “a heretic, a sacrilege, a burner of churches, a killer of priests and other clergymen…” In his Sermons, Boucher openly supports the candidacy of the young duke of Guise under pretense that the country needs “a very catholic king, from a catholic house”.” (De la démocratie chez les prédicateurs de la Ligue, Ch. Labitte, pp. 193-201).