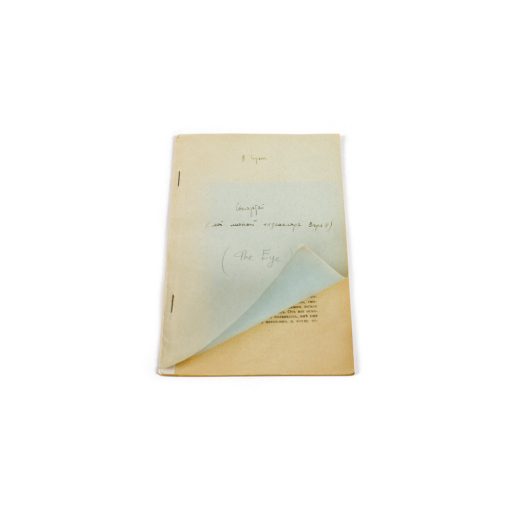 Rare first edition of the The Eye by Nabokov.

The personal copy of Vera Nabokov given to her by the author, her husband.

The stamp from the “Contrôle des informations” of the French customs
reveals that this copy followed the Nabokovs
when they fled Nazism from Paris to New York, in 1940.

The New York Public Library owns a matching copy,
the author’s personal copy of Sogliadatai,
bearing the same seal from the French customs.

Rare first edition of “The Eye” by Nabokov, an offprint of the Russian emigrants in Paris review Sovremennyia Zapiski.

Without a doubt, this copy comes from the personal collection of the author who offered it to his wife.

“The fundamental turn in Nabokov’s work is the year 1930 with The Eye (Sogliadatai), which Berberova considers to be the first mature text, where he manages to free himself from the old canons.” (B. Kreise)

Nabokov’s first novel, written in the first person, The Eye, tells the story of a young immigrant, of his life.

But very soon, the young man dies — kills himself out of love.

Nonetheless, he continues his story, as if death could not prevent him from it. He becomes interested in an individual named Smournov, whom he spies on. He falls in love with a woman who spurns him. No matter, thinks the young man, since I am dead. However, at the end of his account, he wants to make sure of that; he is surprised.

The novel was written in Russian in 1929-1930 and originally published in a collection of stories in 1938 (Sogliadataii, Paris, Izd-vo Russkiïa zapiski); Sogliadatai appeared in the review Sovremennyia Zapiski in November 1930.

“In the Eye, Nabokov attacks Marx and Freud. In the novel, Smurov laments the fate of “the private individuum with his two poor “u”s, allooing hopelessly amid the dense growth of economic causes”. Marx, in turn, is derided as “that crabbed bourgeois in Victorian checkered trousers” whose magnum opus is nothing more than “the fruit of insomnia and migraine.” (Dana Dragunoiu, Vladimir Nabokov and the Poetics of Liberalism)

“Vladimir Nabokov is one of the most brilliant, original and complex writers of the twentieth century.

No writer of the last century as had so broad or so decisive an influence on American, as well as non-American, fiction.

He was born into a family of great wealth and influence in St. Petersburg on April 22, 1899. With the rise to power of the Bolsheviks in 1917, his family fled St. Petersburg for the Crimea, before leaving Russia in 1919, never to return.

Nabokov was sent to study at Cambridge University. In 1922 his father was murdered by Russian monarchists in Berlin. In 1923, Nabokov met his future wife, Vera, whom he married in 1925. Vera being Jewish, the couple left berlin for Paris with their son in 1937. They would sail from Paris to New York in 1940.” (The Encyclopedia of Twentieth-Century Fiction)

This copy bears the stamp from the “Contrôle des informations” on the lower cover.

This stamp from French customs shows that the copy left France in 1940.

We know that the Nabokovs thought to leave Paris for New York in 1940.

This copy probably followed the couple fleeing the Nazis from Paris to New York.

The Bulletin of The New York Public Library, VIII, p.75, describes the copy:

Sogliadatai. Offprint from Sovremennyie Zapiski (Paris), XLIV (November 1940). Nabokov’s copy; with stamp. The round purple stamp on the rear cover of this offprint in the French customs stamp, testifying to the fact that this item was brought to the United States in 1940.

Nabokov described this stamp in Speak Memory: It’s a circular imprint, in the ultimate tint of the spectrum – violet de bureau. In its center, there are two letters R.F. meaning of course République Française. Other letters in lesser type running peripherally, spell Contrôle des Informations. However, it is only now, many years later, that the information concealed in my chess symbols which that control permitted to pass, may be, and in fact is, divulged.…”.