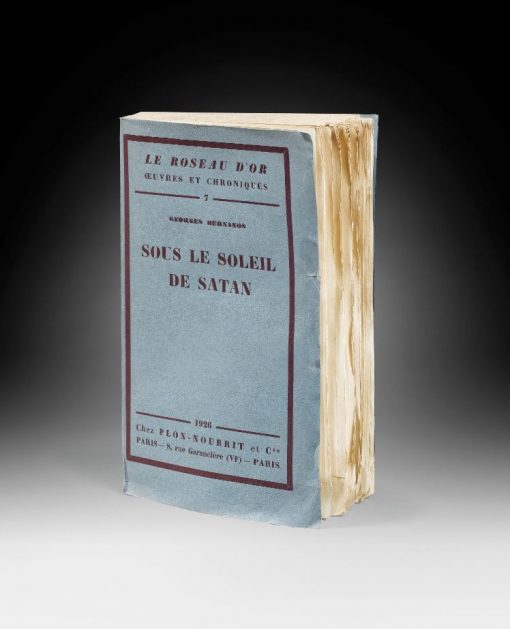 Precious copy from the leading copies, very pure, uncut,
in its original wrappers, as issued.

Uncut, under its original wrappers, as issued.

One of the 212 copies from the leading copies on pur fil Lafuma.

It bears the number N°LXXVI.

“”A fireworks display on a stormy evening.” This is how Bernanos considered Sous le soleil de Satan. This novel is like a rupture. It’s a novel about Satan, about evil and sanctity. In 1926, Sous le soleil de Satan was a challenge held to the dominant rationalist ideology. In his interview with Frédéric Lefèvre, he recalls the circumstances in which his novel was written ; “I started it two months after the Armistice. The face of the world had been ferocious. It was becoming hideous. “” (André Alain Morello)

In this novel, the first by this great Christian author, his powerful style and all his favorite themes are already on display.

Germaine Malorthy, nicknamed Mouchette, is bored in her small-minded provincial town. Looking for an adventure and a way to rebel from her life, she offers herself to the marquis of Cadignan. She seduces him but after come her dependence and downfall. When pregnant, she is shunned and she decides to get revenge.

Following Léon Bloy and Barbey d’Aurevilly, Georges Bernanos (1888-1948) is also a Catholic novelist and pamphleteer. A Catholic and monarchist, Bernanos joined the Action française and the Camelots du roi at a young age and collaborated on few occasions on Maurras’s newspaper. After the Great War, faced with the movement’s lack of spirituality and the growing Fascist threats in Europe, he definitely breaks from Maurras and others, notably taking a stand against the Francoist bloodshed.

His fight is more in keeping with a psychological perspective leaning towards the supernatural than a partisan apologetics. Even though he was born in Paris, Bernanos, raised in the Pas-de-Calais, will keep during his wayward life a visceral attachment to the « paths of the pays d’Artois » that make up the backdrop of his first novel, Sous le soleil de Satan, published in 1926 but written between 1919 and 1925.

At the age of 38, he displays in this very violent novel most of the themes of his work to come : the world of childhood, sanctity, martyr and most of all, the power of evil.

Precious copy from the leading copies, very pure, uncut, in its original wrappers, as issued, of Bernanos’ first novel.