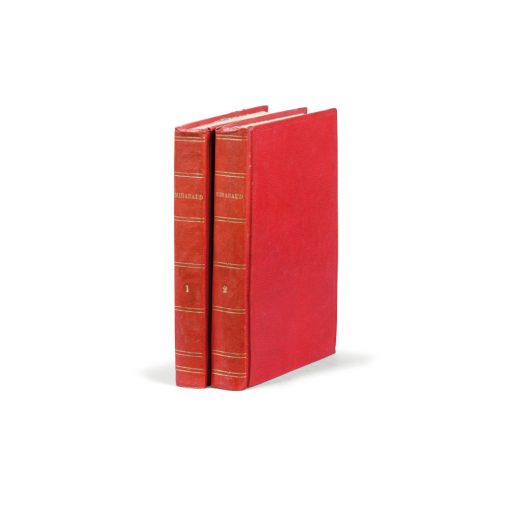 “The Bible of Materialism” (PMM).

First edition and first issue of the “Système de la nature”,
the “Bible of Materialism”, that will be condemned to be burned.

A beautiful copy, wide-margined,
preserved in its contemporary provisional boards,
a rare and sought-after condition.

First edition and first issue of the “Système de la nature”, the “Bible of Materialism”, that will be condemned to be burned and banned.

First issue with the comma on the title after London.

It is under a false name and in Amsterdam that the baron d’Holbach had the “Système de la nature” discreetly printed. Through thousands of detours, the treaty arrived in France and was sold under the table for up to ten louis (240 livres tournois, a spectacular price).

It caused one of the greatest scandals of the century : it was immediately condemned to be whipped and burned on the 18th of August 1770 and was banned the following 9th of November.

“This book made lots of noise in Europe. For La Harpe, it was a “foul book” ; Voltaire denigrated it but with apparent jealousy ; Grimm enthusiastically attributed the pages to Diderot. The refutations of this book were numerous.” (Tchemerzine)

“The best pages are by Diderot.” (Laffont)

The book ends with an apology of atheism that shocked many philosophers and launched quite a debate.

Voltaire made himself heard : “This Système has lost everything, it has made all philosophers seem odious in the eyes of the king and the court.”

In 1771, he tells d’Alembert: “We will never heal from this mortal wound.”

“The two volumes of the Système were often re-printed, as early as 1771.” (Tchemerzine)

“In the “Système”, Holbach rejected the Cartesian mind-body dualism and attempted to explain all phenomena, physical and mental, in terms of matter in motion. He continued his direct attack on religion by attempting to show that it derived entirely from habit and custom. But the Systeme was not a negative or destructive book : Holbach rejected religion because he saw it as a wholly harmful influence, and he tried to supply a more desirable alternative.

In fact, he outlined a whole ethical and political philosophy. It was his aim to derive a morality and an ethic from a completely materialistic and atheistic basis.” (PMM)

“He reached the most extreme position in eighteenth-century free thought. He was far too dogmatically atheistic for most of the philosophes who were “skeptical” and vacillated between atheism and deism. They criticized the established church whereas Holbach dared to attack the very idea of God. The comprehensiveness of the Système de la nature, which even provoked Voltaire to reply in defence of religion, have ensured its survival as the bible of materialism.”

A beautiful copy, wide-margined, preserved in its contemporary provisional boards, a rare and sought-after condition for this major work.