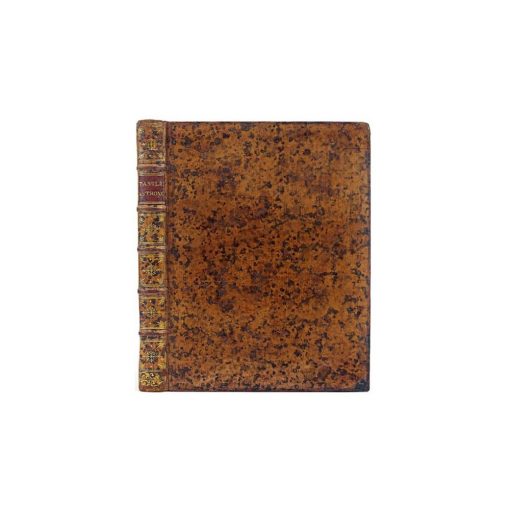 First edition of the renowned Tables astronomiques by Halley.

“This posthumously published astronomical tables include Halley’s calculations relating to the so-called ‘long inequality’ of Jupiter and Saturn, caused by the deacceleration of Saturn and the increasing acceleration of Jupiter. Halley correctly theorized that this phenomenon might be the result of a gravitational attraction between the two planets. The edition also contains the third Latin edition of the Synopsis astronomiae cometicae.” (Norman)

“The lunar tables represent the theory of the motion of the Moon as Newton gave it in the second edition of Principia.” (Cook, Halley, p.366).

“The great comet of 1680-81 piqued Edmond Halley’s (1656-1742) interest. An explorer, naturalist ans inventor as well as an astronomer, Halley, armed with Newton’s theory of gravitation, would gather data about many comets and calculate their correct orbits. A meeting between Halley and Newton occurred in 1684 when Halley. Halley believed so strongly in the genius of Newton’s work that he paid for Newton’s magnum opus, Philosophiae Naturalis Principia Mathematica publication. In 1695, Halley began to study comets intensively. He discovered that Newton had mistranscribed one of the positions for the comet. ” (R. J. M. Olson, Fire in the sky: Comets and Meteors, the Decisive centuries).

“The return of the comets is one of the most curious discoveries made in this century and it is to the famous Halley that we owe it, seeing as the attempts made by Mr Cassini and Mr Bernoulli had turned up empty. It was in 1705 that Halley finished his table with 24 comets, which he published. By comparing these 24 comets with each other, Halley realized that the ones from 1531, 1607 and 1682 had strong almost equal orbits. The resemblance was so striking that he began to hope that we would see the comet again in 1758. The glory is his and when we saw the comet reappear in 1756, all we talked about was Halley. It is because of his genius idea to write up the table of the 24 comets that we owe this stunning discovery. Oh, that we may find in the history of past centuries enough material to prolong the table ! » (Diderot, D’Alembert, Encyclopédie, 1772, X, p.426)