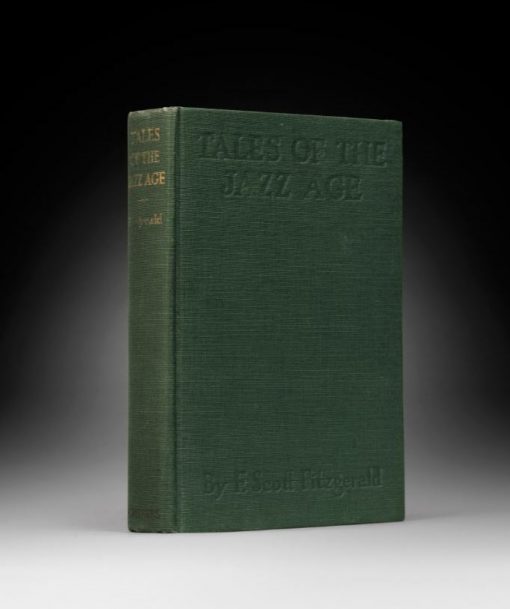 The Curious Case of Benjamin Button, May Day,

The Diamond as Big as the Ritz…

An attractive copy,
kept in its publisher’s cloth, as issued.

First edition of this acclaimed collection of eleven stories grouped together under various headings: My Last Flappers, Fantasies and Unclassified Masterpieces.
Bruccoli 9.1.a.

Tales of the Jazz Age includes two masterpieces: May Day which depicts a party at a popular club in New York that becomes a night of revelry during which former soldiers and an affluent group of young people start an anti-Bolshevik demonstration that results in an attack on a leftist newspaper office and The Diamond as Big as the Ritz, a fantastic satire of the selfishness endemic to the wealthy and their undying pursuit to preserve that way of life.

These stories meld Fitzgerald’s fascination with wealth with an awareness of a larger world, creating a subtle social critique. With his discerning eye, Fitzgerald elucidates the interactions of the young people of post-World War I America who, cut off from traditions, sought their place in the modern world amid the general hysteria of the period that inaugurated the age of jazz.

Fitzgerald wrote a series of excellent stories which inexplicably have been ignored or dismissed lightly by Fitzgerald scholars, and that cream of his achievement as a writer of short fiction was presented to the public in four impressive authorized collections: Flappers and Philosophers (1920), Tales of the Jazz Age (1922), All the Sad Young Men (1926) and Taps at reveille (1935).

Fitzgerald took seriously the production of these collections, carefully selecting the stories he wished to include, revising their texts, correcting proofs, choosing typeface…

To Fitzgerald, these four authorized collections were works of art to be crafted with the sort of care he devoted to his better-known novels. These story collections are the permanent record of what Fitzgerald felt was a vital aspect of his work as a writer.

An attractive and pure copy kept in its original cloth, as issued.