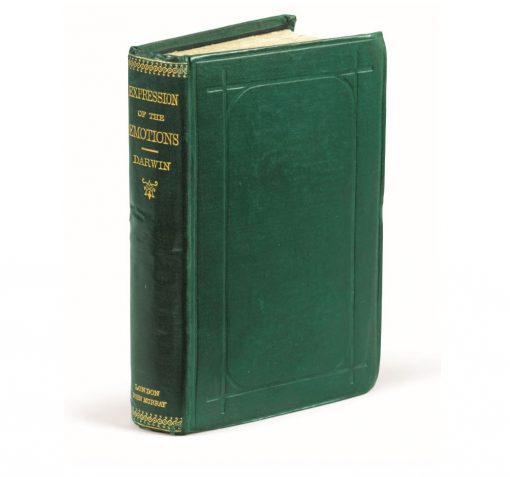 Darwin, Charles
The Expression of the emotion,
1872.

First edition of this major work by Darwin.

“This is an important member of the evolutionary set” (Freeman).

An attractive copy,
preserved in its contemporary binding, as issued

Darwin, Charles. The expression of the emotions in Man and Animals.
London, John Murray, 1872.

First edition and second issue of this “work of major importance” by Darwin (G. A. Gurev).

Included are 7 photographical plates, out of pagination.

Complete catalogue from the bookseller Murray at the end of the volume.

““The expression of the emotions in Man and Animals”, which Darwin had first conceived as a chapter in the “Descent of Man” but later became a work of major importance, is directly linked to this one.” (G. A. Gurev)

In 1872, Darwin published “The expression of the emotions in Man and Animals”. In men, as in animals, Darwin shows that it is emotions and feelings that produce involuntary actions. And these primary actions stabilize and modify themselves when constrained by three great principles. The principal of serviceable associated habits allows to unify expressions and actions that seem advantageous. The principal of direct action of the nervous system explains that certain expressions are the direct consequences of the nervous system’s elaboration. The third principle of the antithesis is more mysterious. It postulates that from the time an emotion has given rise to an expression or an action, the rise of an opposite emotion can generate a response opposite to the first.

“This is an important member of the evolutionary set, and it was written, in part at least, as a confutation of the idea that the facial muscles of expression in man were a special endowment.” (Freeman)

“In the introduction of the “Descent”, Darwin mentioned that he had intended to consider the expression of various emotions in men and animals. He decided to hold his study of the emotions for another volume since, as he suggested, even a gentleman’s patience might be tested were the Descent further swollen. “The Expression of the Emotions” is an original and disconcerting book.” (R. J. Richards, Darwin and the Emergence of Evolutionary Theories)

Darwin saw emotions as internal psychological states, the expressions of which are rudimentary vestiges of behavior handed down from our ancestors. More specifically he argued that human facial expressions had a common evolutionary origin with our primate relatives.

In “The Expression of the Emotions in Man and Animals”, Darwin introduced three principles around which he considered emotions to be based:

2/Antithesis. Here the idea is that the expression of positive and negative emotions occur in pairs.

3/Direct action of the excited nervous system on the body independently of the will.

“With this book Darwin founded the study of ethology (animal behavior) and conveyance of information (communication theory) and made a major contribution to psychology.” (DSB)

One of the first books to feature printed photographs, “The Expression of the Emotions in Man and animals” discussed the evolution of human psychology and its continuity with the behavior of animals.

The book proved very popular and Darwin was impressed by the general assent with which his views had been received.

His conclusion was that “Man with all his noble qualities, with his god-like intellect which has penetrated into the movements and constitution of the solar system-with all these exalted powers- Man still bears in his bodily frame the indelible stamp of his lowly origin”.

An attractive copy preserved in its contemporary binding, as issued.