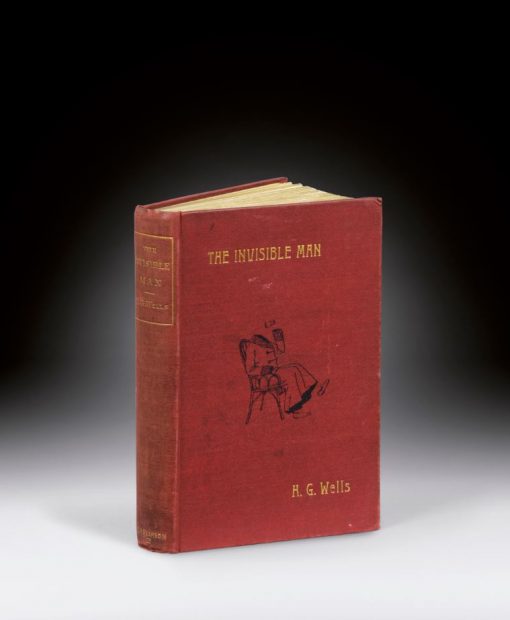 A beautiful copy preserved in its publisher’s red cloth, as issued.

Publisher’s red cloth decorated on the upper cover with the title and the name of the author stamped in gilt letters and a presentation of the Invisible Man blind-stamped, flat spine.

First edition, first issue of this great science-fiction novel by H.G. Wells, with the title page printed in orange and black, page 1 misnumbered and pages 247 and 248 being publisher’s ads.

“The Invisible Man remains not only an inescapable influence on modern science fiction but also a “classic study of scientific hubris brought to destruction”.” (Clute & Nicholls, 1313)

“A novel by the English author Herbert George Wells (1866-1946), published in 1897. The young Griffin is studying physics; he is very intelligent but very poor and he has discovered a way of rendering all tissue transparent, even living cells, and he experiments this process on himself […]. This novel belongs to the series of fantasy novels with which Wells started his career as a writer. He was inspired by the progress of modern science. The social issues took up an important place in the author’s mind. Even though the “Invisible Man” is guilty of several crimes, he is a great proletarian who, in the end, is much more sympathetic than the “gentleman” Kemp, who is shy and secretly envious of the scientific superiority of his old comrade, and offended by his lack of education. There is real bitterness in this novel: if you are poor, don’t be different from the others, don’t be more intelligent than average, don’t trust the rich; they will try to destroy you by all means. The novel met with great success.” (Dictionnaire des Œuvres, III, 592)

“We know Wells in France as the author of ‘l’Homme invisible’, of ‘Premiers hommes dans la Lune’, of ‘L’Ile du docteur Moreau’, of ‘la Guerre des Mondes’ and of ‘la Machine à explorer le temps’, like a sort of Jules Verne but less didactic, and able of extracting from physics and biology elements of a poetical fantasy. But H.G. Wells is also one of the men who dominated British thought in the first third of the 20th century: he is, with Kipling, and maybe also Galsworthy, one of the pictures that England offers of its intellectual life.” (P. Nizan, Pour une nouvelle culture)

A beautiful copy preserved in its publisher’s red cloth, as issued.

First edition of The Invisible Man, an attractive copy, clean with no writing or marks or inside, preserved in the publisher’s original red cloth, rare in this condition.