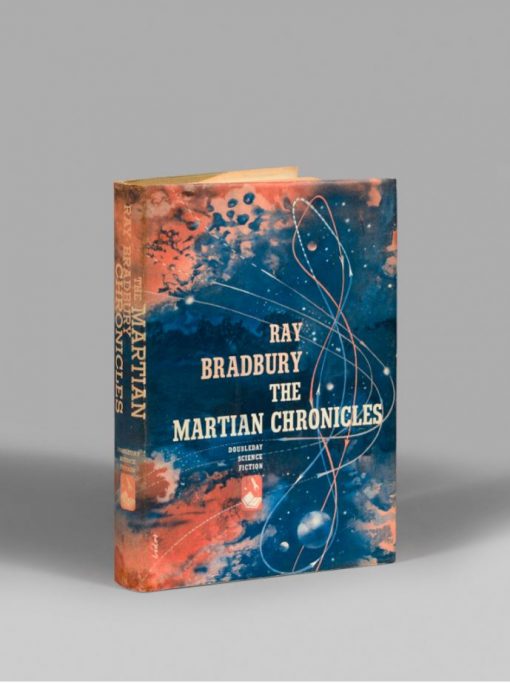 First edition of The Martian Chronicles, a cornerstone
of 20th century science fiction.

An attractive copy kept in its original cloth with its dusk-jacket, as issued.

“The Martian Chronicles was the book that established Bradbury’s reputation He put far more emphasis on style and mood than he did on technical detail or scientific plausibility His reward was a stunning popular and critical success” (Science Fiction 100 Best).

The Martian Chronicles is one of Ray Bradbury’s classic novels. Bradbury imagines what life would be like on Mars. The Earth Men are drawn to Mars following a threat of nuclear war. They make many attempts at visiting and inhabiting Mars-some successful, some not.

“What is most surprising about this world-famous text is that it mostly brings to mind, with sobriety and poetry, the author’s feeling of nostalgia for the Mid-West of his youth and that the uprooting which follows is most largely based on the portrait of a country that no longer exists than by the appearances of the Martians, which are a bit artificial.” (Dictionnaire des Œuvres)

Bradbury was often considered a science fiction author, but he said that his only science fiction book was Fahrenheit 451. Strictly speaking, much of his work was fantasy, horror, or mysteries. He said, “I use a scientific idea as a platform to leap into the air and never come back.”

“A native of Illinois, where he was born in 1920, and long a resident of Los Angeles, Bradbury was truly the occupant of a dark future that he feared was not all that distant. After a childhood in Waukegan, Ill., spent largely reading in libraries, Bradbury came to Los Angeles in 1934. He immersed himself fully in the world of science fiction. Fame would not come until his 1950 short story collection “The Martian Chronicles,” in which nuclear war drives humanity to search for a home on the Red Planet. The brutality of the humans to the indigenous Martians is a commentary on the ravages of World War II and the doom portended by the Cold War. As with later works, fantastical inventions mask a deep moral sense. The British writer Christopher Isherwood, then also a Los Angeles resident, gave Bradbury a career-making review in “Tomorrow” magazine, praising the author’s “very great and unusual talent” (A. Nazaryan).

An attractive copy perserved in its original cloth, with its dusk-jacket, as issued.