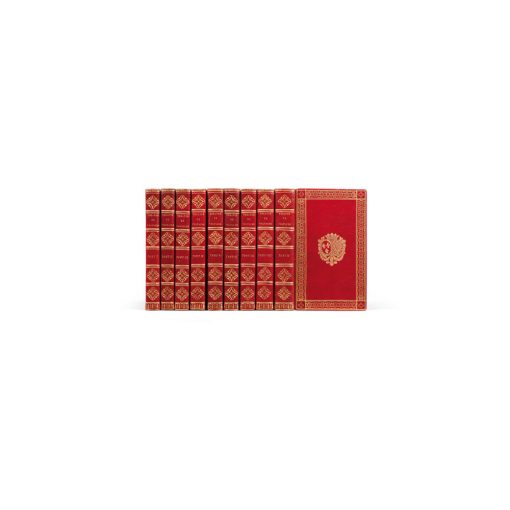 bound in contemporary red morocco
with doublures and green water silk endpapers,
with the arms of the Duchesse de Berry.

One of the deluxe copies in 8vo format of the beautiful series of 44 engravings drawn by Moreau le jeune and engraved by Delvaux, Simonet, Roger, Blot, Romanet…

In the 18th century, privileged audiences had a passion for theater, one of the biggest cultural trends. Voltaire, devoured by this passion, was a playwright, an actor and a director. Everywhere he settled, he built or encouraged the construction of theater halls.

Voltaire’s Théâtre built his glory and enthused his contemporaries. Voltaire was the greatest dramatic author of the 18th century and reigned over the stage of the Comédie française from 1718 to his death. He wrote around fifty tragedies which, according to René Pomeau’s estimates, have been applauded, and seldom whistled, by two million spectators. In Paris, his biggest successes were, in order, Zaire (1732) ; Alzire (1736) ; Merope (1743) ; Sémiramis (1748), Œdipe (1718) ; Tancrède (1760) ; l’Orphelin de la Chine (1755) and Mahomet (1741).

“Zaire” was performed for the first time on the 13th of August 1732 at the Théâtre-Français, and published in 1738. It is the most famous and probably the only surviving of Voltaire’s tragedies. Filled with the sensitivity of the time, it called to the aspirations of the era, when the “French soul seemed to be one degree hotter”. Love is only occasionally considered guilty; it is no longer represented as a weakness or a danger, and it comes close to being a virtue. The growth of dramatic subjects, the audacity, the subtle thinking, the intelligent narratives, are all characteristic of the Voltaire way.

Voltaire used Christianity as a dramatic mean, the strongest, he felt, that could be opposed to love and triumph over it; the famous adjuration by Lusignan displays a powerful emotion that seems to draw from the depth of fervor and conviction. Besides Christianity, Shakespeare’s theater inspired Voltaire ; as he said so himself in his dedication epistle to M. Falkener, he owes to the English theater “the boldness he drew on to use the names of our kings and old families; the action that pretends to resuscitate history, it is set in the time of Saint Louis”. But the author’s debt goes further than that, and it is hard not to see that he drew some elements from Othello for Zaïre, if only it be the theme of confabulation. For the style of his play, and in keeping with its topic, Voltaire “loosened the strings of his lyre”: his vigor lacks subtlety but it is touching; the overall impression is one of flexibility.

Zaïre is a classic in its choice of topic, structure, language (numerous reminiscences of Racine). It is Voltairian in spirit and execution and already tends towards Romanticism in its quest, albeit still superficial, of some local and historical picturesque.

A precious and superb copy printed on fine Dutch paper and sumptuously bound in contemporary red decorated morocco singed by Doll and with the arms of the Duchesse de Berry.

“Marie Caroline Ferdinande Louise de Bourbon Sicile (1798-1870), daughter of Ferdinand Ier, king of the Two Sicilies, and of Marie Clémentine, arch-duchesse of Austria, born in Naples on the 5th of November 1798, married on June 17th 1816 Charles Ferdinand d’Artois, duc de Berry, the second son of the future Charles X, who was assassinated on the 13th of February 1820. A widow at 22 years of age, the duchesse dedicated herself to the education of her children, Louise-Marie-Thérèse d’Artois et Henri-Charles-Ferdinand-Marie Dieudonné, duc de Bordeaux, born posthumously. Very brave, she tried to launch a legitimist uprising in Vendée in 1832, which failed. Betrayed on the 7th of November by the converted Jew Deutz, she was sent to the citadelle de Blaye where she gave birth to a daughter she had with the count Hector Lucchesi-Palli, whom she had secretly married in 1831. Freed in June 1833, she was isolated by the royal family and was forbidden from participating in her son’s upbringing. She lived in Venice and died on April 17th 1870 in the castle of Brunnsee in Styria. She had great artistic taste and had built, in her castle in Rosny, near Mantes, a luxurious book collection remarkable not only because of the editions chosen but also the beauty of the bindings.”