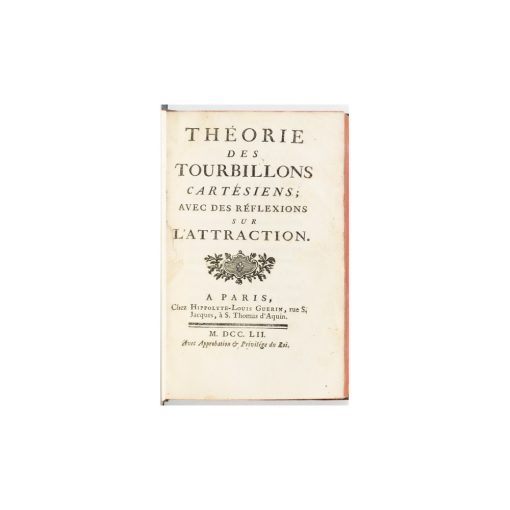 Rare first edition of this important work by Fontenelle
where the author explains his affiliation with Cartesianism.

This work constitutes Fontenelle’s last attempt to defend Cartesian cosmogony against the then all-triumphant Newtonian theories.

More metaphysical than scientific, la Théorie des tourbillons cartésiens justified heliocentrism and attributed the movement of the planets to great whirlwinds of ether filling up space.

The “editor’s preface” broaches the topic of the opposition between Newtonians and Cartesians in France. It was written by Camille Falconet, a doctor appointed to the king and a friend of Malebranche and the author.

“1686-1752, these two dates define the “public” period of activity of the scientist Fontenelle. 1686, is when the theory of the whirlwind systems, as exposed in the third and fourth part of the Principles, is in vogue; the young Fontenelle receives in little time the esteem of specialists and of the great literary salons with his summary of the “actual” state of astronomical science that are his Entretiens sur la pluralité des mondes habités ; a surprising literary and scientific achievement that, under the pretense of a false courtship with a marchioness thirsty for knowledge, develops a grandiose Cartesian vision of the Universe, stating that “it is big like a small watch”.

1752 : the Newtonians, led by Maupertuis and D’Alembert have finally prevailed in France ; in the past years, expeditions in Lapland and Peru have confirmed the accuracy of Newton’s principles ; they are now at a stage of wide popularization and no one in enlightened circles would dare pronounce the word “whirlwind”. In between these two moments, Fontenelle relentlessly worked to try to defend Cartesianism.” (François Grégoire)

In 1687, when Perrault, upon reading, during an extraordinary session of the Académie, his poem Le Siècle de Louis le Grand, set off the famous quarrel between the Ancients and the Moderns, Fontenelle aligned himself with the latter. In 1690, he abandoned entertainment literature for about thirty years : began the second and best part of his intellectual life. A Cartesian with no preconceived ideas, a spiritual man and a man of the salons who had gotten rid of his dubious taste, he dedicated most of his time to his correspondence with different foreign scientists.

More so than Fénelon, Fontenelle made the transition between the 17th and the 18th century. No one was as knowledgeable, as easy to follow and elegant.” (Dictionnaire des Auteurs)

A beautiful copy of this rare first edition by Fontenelle, preserved in its contemporary binding.