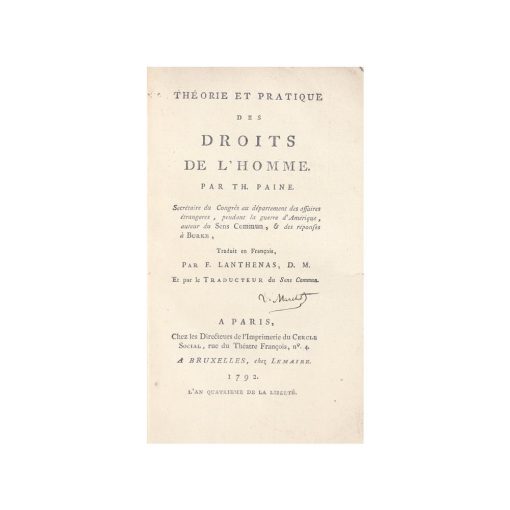 the title of citizen of France”

An untrimmed copy preserved in its contemporary wrappers.

First French edition of this pamphlet by Thomas Paine which “created a great stir, was burned in England and earned the author the title of citizen of France”. (E. Psaume).

This response to M. Burke’s attack on the French Revolution, Rights of Man, is made up of two parts.

The first one, dedicated to George Washington, is a justification of the events in France and a criticism of the aristocratic and monarchic institutions.

The second part, dedicated to La Fayette, exposes a theory of society in general and its government: the governments are founded either on superstition, on authority or on the common interest of society and the rights of the people.

The first part’s success was immediate.

The French translation of the text had an even greater popularity.

All of the “friends of the Revolution” supported entirely and publicly the ideas developed by Paine. Nicolas de Bonneville handled its publication at the printing presses of the Cercle Social where were already published Brissot, Condorcet, Desmoulins and Fabre D’Eglantine, and which happened to be between 1791 and 1793 the main publishing company of the Girondins leaders.

The enthusiasm following the publication of this text allows Thomas Paine to become a French citizen in August 1792 and later member of the Convention Nationale.

In Paris, Paine observes the events, certain that France will follow the democratic example of America, that the Revolution will be peaceful and will inevitably lead to the instauration of democratic regimes in all of Europe.

The French revolutionaries considered the Americans as their predecessors and America as a model to be followed.

In a speech given on the 10th of July 1791 Brissot proclaimed : “The American revolution gave birth to the French Revolution : it will be the sacred hearth where the spark that will ignite all nations whose masters dare to approach it will start !”

In 1787 he wrote: “What I’m saying, a famous American, who has largely contributed, with his patriotic texts, to spreading, supporting, exalting among his compatriots the enthusiasm of freedom, Mr Paine, has said it before me.”

Handwritten ex-libris on the title-page.