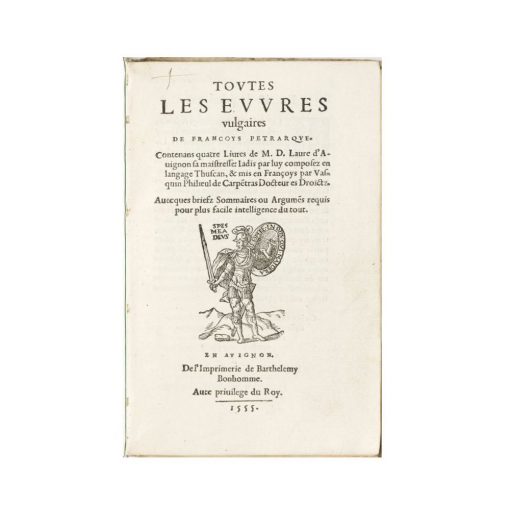 Beautiful first edition of the French translation by Vasquin Philieul (1522 – v.1586) who dedicated the first book to the queen Catherine of Medici, the second to Marguerite de France, the third to Jean Ange Papius, first regent doctor in Avignon, and the fourth to the Roy très Chrestien Henry deuxième.

It is printed in round and italic characters.

“Vasquin Philieul played an important part in the divulgation of Petrarch’s poetry in France in the 16th century: he was the first to publish a complete translation of the vulgar works of the Italian poet. Before him, only Clément Marot and Jacques Peletier du Mans had tried to transpose Petrarch’s sonnets into French but their contribution was very incomplete: Marot had translated six sonnets and one song, Peletier twelve sonnets inserted in his Œuvres poétiques. In the middle of the century, which was the century of a triumphant Petrarch, a French translation of the Tuscan poet’s vulgar work was still inexistent, at least for the “Rerum vulgarium fragmenta”, seeing as the “Triumphi” had already been translated into French. Vasquin Philieul was the one who undertook such an enterprise.” (Jean Balsamo, Les poètes français de la Renaissance et Pétrarque)

“Petrarch, the beacon of literary culture of his time, is a master who decisively influenced the taste and way of life of the Renaissance.” (Dictionnaire des auteurs)

“Already a reference for all the intellectuals of his time, Petrarch became a myth at the dawn of the Renaissance… He was born in France, under the king François Ier, who truly encouraged the cult of Petrarch. The canzoniere to Laure and his sonnets became the new standard of French love poetry, not only in style but also in themes… Petrarch symbolized the valorization and triumph of the vulgar tongue above Latin, a sentiment that was just beginning to emerge in France, and that Du Bellay wanted to accelerate by imitating the Italian example. Petrarch’s work was vulgarized… In 1548, a canon from the Avignon cathedral, Vasquin Philieul, gave the first partial translation of Petrarch’s canzoniere under the title of Laure d’Avignon, and then, seven years later, the complete French version, Toutes les Euvres vulgaires de Françoys Petrarque.” (N. Ducimetière, Mignonne, allons voir…, n°1)

The La Roche Lacarelle copy, sold 11 000 (13 530 with fees) on 17 November 2011, was bound in 19th century morocco, and the Henner copy (which passed into the collection of the fondation Barbier-Mueller) was bound in modern calf.

This first complete French edition of Petrarch’s Œuvres is very rare and even more so in its contemporary binding.

A superb copy, with wide margins (height: 167 mm instead of 162 for the La Roche Lacarelle copy), very pure, preserved in its contemporary overlapping vellum.