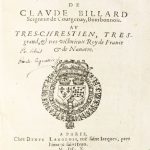 Rare and precious first edition of
the tragedies of Claude Billard dedicated to king Henri IV, where the author,
before Callot, condemns the Wars of religion.

“First edition of the seven tragedies which indeed belong to the 16th century, even though the author delivers them to the printer the year of Henri IV’s assassination, before his death, of course, as shown by the dedication. Claude Billard, sire de Courgenaye (1550-1618), considers himself a leading follower of Ronsard and the first poem by him of which I am aware of was published in a rare collection by Isabelle d’Antoine Mathé de Laval, in 1576.

After having been employed by the duchess de Retz, in 1576 he went on to being employed by her friend the queen Marguerite de Navarre, the future wife of Henri IV, to whom he became an adviser and the secretary of finances.

Henri, viscount and later duke de Rohan in 1603, prince of Leon, head of the protestant party in France, fought his whole life for the respect of the Edict of Nantes and ended his life in exile in Venice, Geneva and Germany. One can wonder if Billard, who praises Rohan and his sisters, didn’t feel any sympathies with the Reformation. Under Henry IV, it was not well-considered” (J. P. Barbier-Mueller).

“Edited under the title of Tragédies françaises, the plays of Claude Billard de Courgenaye, considered by Agrippa d’Aubigné and Habert as Ronsard’s faithful disciple, were published three times, in 1610, 1612 and 1613, before the author died in 1618. The first, dedicated to king Henri IV, broaches very heterogeneous topics borrowed from the Bible, mythology or fiction, and two tragedies are based on French events. The dedication to the king creates a link between the real historical tragedies the king lived through and the fictional tragedies, where the tragic aspects are just a vague representation of the real tragedies. Behind the diversity of topics and eras chosen, these plays all share the common traits of conflict and chaos, in a symbolic representation of these troubled times which, and it is ironic, will begin all over and last ten more years. Present in the Wars of religion on the Catholic side, Billard remembers the excesses of the civil or foreign wars which bloodied France. This explains his paradoxical discourse dedicated, on one hand, to the defense of the heroic act and, on the other, able to generate pity by describing the horrors and sufferings of war. In opposition to the fear of chaos emerges a political ideal based on the French model. But France is not only a poetic model, it is also a political model. Following in the footsteps of the Franciade, the author praises his nation while criticizing Italy and Spain” (Christian Zonza, Les discours politiques dans les tragédies de Claude Billard).

No copy has been recorded on the market since the beginning of the surveys, more than 35 years ago