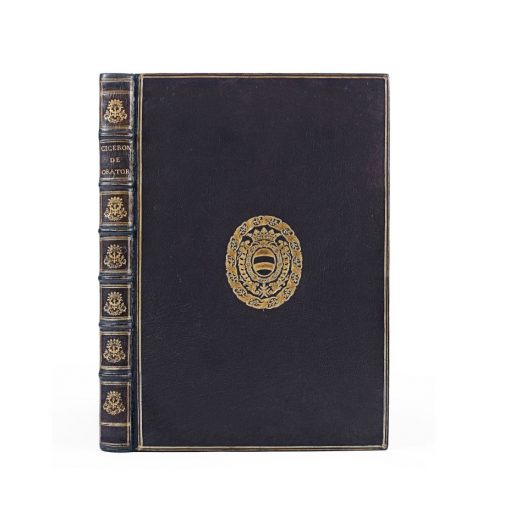 Prestigious copy of “On the Orator”,
Cicero’s masterpiece,
bound by Padeloup in black morocco
with lemon morocco doublures
and arms and emblems of the Count of Hoym.

From the libraries of Robert Hoe
and Raphaël Esmérian with ex-libris.

Beautiful humanist edition of Cicero’s “On the Orator”, important because of the comments by Jacques-Louis d’Estrebay, more famously known under his Latin name, Strebaeus. Born in Estrebay in the Ardennes, he was a professor in Reims, and commented classical texts, especially Aristotle and Cicero.

Printed in the Parisian presses of Michel Vascosan, it is decorated with large Renaissance portico frames on the head of each book and 6 large and superb historiated capital letters, with crowned dolphins, fleur-de-lis, armored fauns and Renaissance portrait.

Cicero was one of the most studied authors during the Renaissance. He inspired a real intellectual current of modern rhetorical studies in the 16th century.

The “On the Orator”, Cicero’s rhetorical masterpiece, orchestrates a dialogue between Crassus and Anthony.

In this work, Cicero develops his theory on the art of speech, based on science and eloquence, and which therefore demands that the speaker be intelligent, have a considerable knowledge, practice different kinds of eloquence and dispose of natural action prone qualities, as in the way to present and give a speech. Failing that, he will have no power over his public’s soul.

Magnificent ruled copy bound by Padeloup in black morocco with lemon morocco doublures and arms and emblems of the count of Hoym, “a 17th century humanist”, a great bibliophile, a plenipotentiary minister of Poland in France, and whose prestigious library was dispersed in 1738.

Most copies were bound by Padeloup. This one bears the rare tag of the printer, glued under the editor’s address.

“The count of Hoym, plenipotentiary minister of August II, king of Poland, was chevalier de l’ordre de l’Aigle blanc de Pologne. He was an accomplished bibliophile. The abbot Rothelin inspired him to collect books. From 1717 to 1735 he assembled, through sales, the most rare, beautiful and precious copies. His library was so famous that Lenglet Dufresnoy said: “It could very well be considered a prodigy of literature.” (Guigard. Nouvel armorial du bibliophile, II, 260)

From the libraries of Robert Hoe and Raphaël Esmérian with ex-libris.