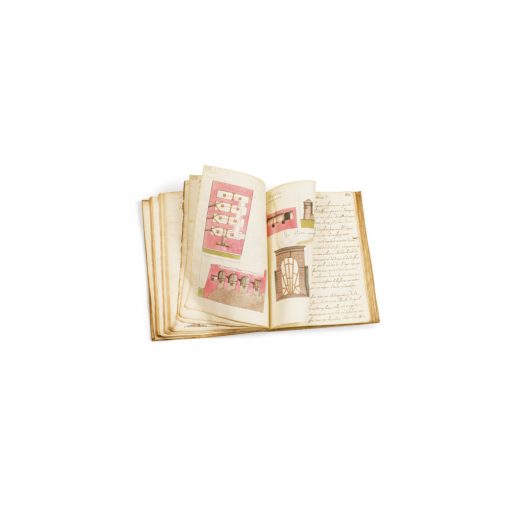 Beautiful and precious manuscript of the Traité des Mines

A very beautiful and precious manuscript of the Traité des mines written in brown ink, in contemporary color.

It is decorated with an elaborate illustration comprising of diagrams enhanced with pink, green, brown and gray watercolors.

In the second half of the 18th century, the profound transformations of French artillery revolutionized this weapon. They are the result of punctual decisions and technical progress.

Shortly after the treaty of the Pyrénées, the Le Tellier clan decides to transform artillery into its own independent weapon, with modern material used by a specific unit, well-trained and in sufficient numbers. For thirty years, it strives to make this ambition project necessary to Louis XIV’s policy of conquests come to life. How can France lead a siege war without a good artillery?

During this time, the idea that officers should receive some training is making headway; experience is not enough. Saint-Rémy wants to write a book useful to all officers. He goes about this in an educational way, not doctrinal, an approach he defends.

“Military books have a theoretical and practical vocation: the practicalities go hand in hand with an interest for the development of science, as advocated by the enlightenment.

The mathematician Guillaume Leblond (1704-1781), a specialist in the art of war, wrote the Traité de l’attaque des places. The illustrations in the book are made up of engravings.

In the particular domain of the art of war, the books must have a practical element; which explains that one often finds, next to printed editions, very well-crafted manuscripts.

The mine is an attack technique of fortresses based on the construction of a system of underground tunnels supported by stays and dug under a fortification whose foundations are weakened with gunpowder: the point is to open a breach in the wall to allow the soldiers to attack. The idea of using explosives was thought up by Bélidor after a series of experiments undertaken from 1732 to 1753 and his work was taken up by the engineer Lefebvre.” (N. Hacquebart-Desvignes, Les livres d’art militaires français au siècle des Lumières)

A beautiful and precious manuscript of the Traité des Mines decorated with numerous illustrations in contemporary colors, preserved in its contemporary vellum.