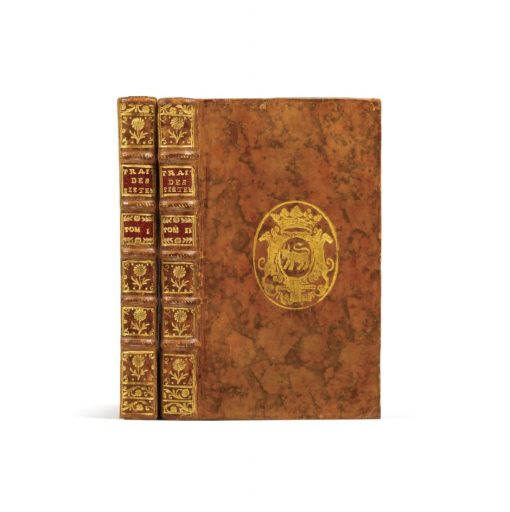 First edition of the Traité des systèmes by Condillac.

Precious copy in its contemporary binding
with the arms of the widow of the president Bouhier.

First edition of the Traité des systèmes by Condillac.

“In his Traité des systèmes, Condillac dismisses those who “create abstract systems”, amongst whom he places Malebranche, Leibniz and Spinoza. In chapter 10 of this lapidary essay, written in a vivid and often ironic style, the author delivers a methodical refutation of Spinoza’s speculative thinking as it presents itself in l’Ethique, published in 1677 and that Condillac read in Latin. Prone to empirical methods and principles, he does not hesitate to criticize Spinoza for his lack of pragmatism, of empirical foundation, for giving no examples.” (P. Laurendeau).

Condillac (1715-1780) lived in Paris and met all the great writers and philosophers of his time : Fontenelle, Rousseau, Diderot, D’Alembert, Voltaire and Turgot.

It’s while in the company of these knowledgeable men that Condillac imagined and published the Traité des Systèmes.

His work made him quite famous and in 1758 king Louis XV sent him to Parma to be the tutor of the infant Ferdinand, the son of Philippe de Bourbon and of Marie-Louise Elisabeth, daughter of Louis XV.

“Surely the most sympathetic trait of Condillac’s mind is his tranquil disdain for all common preconceptions. He is not an apostle and even less a fighter. He would most certainly have been frightened by his spiritual heirs, the Helvétius, d’Holbachs and La Mettries who will soon openly teach materialism. But he was their predecessor.

In the undoing of Cartesian rationalism, Condillac’s actions were necessary : they opened the way for the positive philosophy of the next century.” (J. Patry)

Precious copy, wide-margined, preserved in its contemporary calf binding with the arms of the widow of president Président Bouhier (1673-1746).

The president Bouhier had a passion for knowledge and dedicated himself to it as soon as his functions allowed him to ; he had acquired a solid reputation as a man of science and erudition and was elected to the Académie française on June 16th, 1727, with the authorization of not residing in Paris, which was only granted to bishops. He was well-versed in jurisprudence, ancient and modern languages and he left books from all branches of literature ; his successor at the Académie was Voltaire.

Heir to an illustrious family of members of the Parliament of Dijon and of book collectors, the president Bouhier was an experienced bibliophile who read and marked books ; his collection of rare and richly bound books was renowned throughout Europe and was passed down to his son-in-law, Chartraire de Bourbonne and then to the abbey of Clairvaux before being dispersed by the Revolution. (O. Hermal, pl.2423).