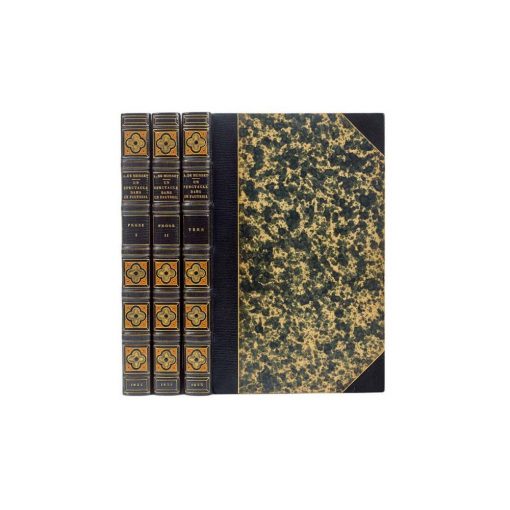 An exceptional copy either in contemporary quality binding or with covers.” (Clouzot)

A beautiful and precious copy, with wide-margins,
and preserved covers and spine.

First edition of this “extremely rare ensemble. The last two volumes, in prose, partially destroyed, are much harder to find than the first one”. (Clouzot)

“This second issue of the “Spectacle dans un fauteuil” containing the first plays by Musset was edited by the “Revue des Deux-Mondes”. The director Buloz suggested to Charpentier the idea of publishing Musset’s Oeuvres in his 12mo collection, like the “Poésies Nouvelles, 1840”, and therefore sacrificing to the success of this enterprise a certain number of copies from his 8vo edition that remained in the collection of the “Revue”. This explains the great rarity of these two volumes in prose.” (Carteret)

“The first issue is in keeping with the “Contes d’Espagne et d’Italie” : we can see Byron’s influence. But it’s the charming comedy “A quoi rêvent les jeunes filles” that garners our attention: this sketch heralds the best of Musset’s theater.

Much ink has been spilled on the chronology of these five new plays because they are contemporary to Musset’s affair with George Sand (…).

By not conceiving his plays for the stage, Musset has turned his back on the experience of romantic drama which, despite Dumas et Hugo, had arrived at a dead end. By ridding himself of the clichés and the antithesis of melodrama, by favoring the authenticity of the emotions over dramatic effects, he has demonstrated the possibility of a truly romantic theater.” (L. Chotard)

The first volume containing two of Musset’s plays in verses is preceded by a dedication in verse that gives some interesting information on Musset’s poetic inspiration and his attitude towards the literary movement of the time: he considers himself the play-object of inspiration in all its power. No author before him had thus introduced his reader to the poetic creative process with this much accuracy but also with this kind of self-distance. But this preface also highlightens the huge gap that separates Musset from his contemporaries: in the after-days of 1830 (triumph of the romantic movement), the author’s judgement on the literary art of his time is most pessimist: “Today art is no more”, he says. With this collection, Musset took possession of himself and claimed his originality, and Sainte-Beuve, who saw in his theater the peak of Musset’s art, did not see wrongly.

Hippolyte Fortoul praises the fecund imagination and dramatic originality of Musset’s genius, allowing him to create a new theater, free from “dates, costumes, any historical chain”.

“Because it is man that he is always searching for, Musset manages to avoid, in his theater, the scenic pompousness that prevailed in the plays that were contemporary to him. This distinguished collection proved that one can be romantic and create a simple, beautiful and profoundly human dramatic piece; meaning there existed a romantic theater that looked nothing like Hugo’s.” (N. Furman, La Revue des Deux-Mondes, 1831-1848, p.104).

“There can be no doubt that the prose plays of 1833-1834 reveal Musset at his dramatic best, at the highest point.” (H. S. Gochberg, Stage of dreams)

“An exceptional copy either in contemporary quality binding or with covers.” (Clouzot)

A beautiful and precious copy, with wide-margins, and preserved cover and spine.

Provenance : handwritten ex-libris “Le comte Michel Wrall…” on the title-page of the first volume; presence of an unidentified armorial ex-libris on the blank leaf; Russian library mark on the verso of the cover of the first volume ; libraries Victor Mercier and André Chauveau, with ex-libris.