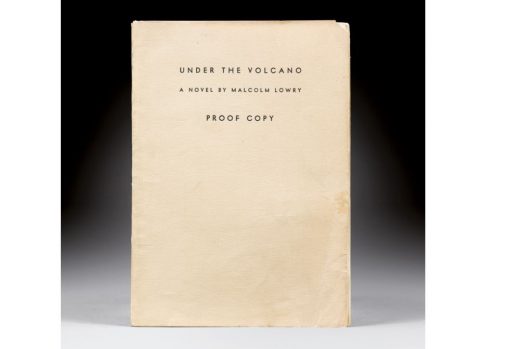 Malcolm Lowry’s Under the volcano, “One of the twentieth century’s great undisputed masterpieces.

An attractive advance reading copy of one of the masterpieces
of twentieth-century literature.

Malcolm Lowry’s Under the Volcano tells the story of Geoffrey Firmin, an alcoholic British consul in the small Mexican town of Quauhnahuac, on the Day of the Dead in 1938.

The novel was out of print by the time Lowry died of alcoholism in 1957 yet is critically acclaimed today. The Modern Library ranked Under the Volcano eleventh on its list of the 100 best English-language novels of the 20th century. TIME included the book in its list of 100 best English-language novels from 1923 to the present. In 1984, John Huston directed a film adaptation of Under the Volcano. It received Oscar nominations for Best Actor in a Leading Role and Best Original Score.

This novel is about the forces that besiege man and bring him to the point where he frightens himself. It is also about the fall of man, his remorses, his never-ending fight for light under the weight of his past, his destiny. The author says: “It is made up of twelve parts and the core of the narrative is contained in a day of twelve hours. Likewise, there are twelve months in a year and the whole book is enclosed within the limits of a year…” The symbolic of the number twelve is underlined multiple time by references to the Jewish Kabbala ; the one of the eternal return by the repeated description of a Ferris wheel that always brings its cabins back to the exact same spot after having made them go around the same circle over and over again. The number of the Tree of life, time going back on itself, and numerous other fascinating suggestions activate the mind so it will accord itself to the rhythm of this strange symphony of which the chapters are the movements. That being said, in the beginning, a huge chapter erected like a wall; but if one makes it to the other side, it turns into a rampart walk where one can see all of the crossroads of life. In appearance, a novel which takes place in Mexico and benefits from the powers of this earth full of myths and death to amplify the hero’s alcoholic delirium — a novel on the failure of love and on the impossibility of communion with the other…

“ A fascinating work, a work on fascination… a sort of drunk Divine Comedy… This novel reveals itself in form and content. It is marvelously lost and perfectly mastered.” (Maurice Blanchot).

Such a book cannot be summarized.

Number of commentators have given symbolic interpretations and it is probable that the novel plays on the imagery of knowledge, but it contains a much more simple and human lesson.

It is one of the greatest novels of today, in regards to its style, composition, ideas and the depth of its imagery.

An attractive advance reading copy of one of the masterpieces of twentieth-century literature.

By their nature, proof advance review copies are quite scarce, so if they are copies of successful titles, they are often considered to be highly collectible and valuable. They are great additions to personal rare book collections, and they can add diversity and insight to the collection.