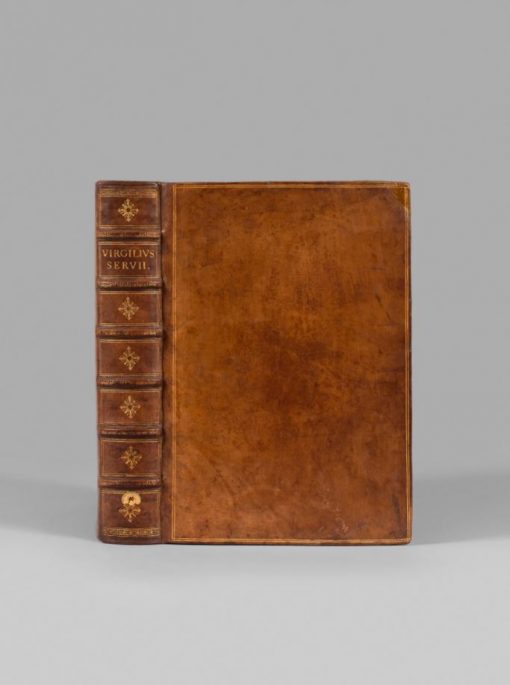 Virgil is the greatest genius that humanity ever produced,

“This edition is beautiful and deserves to be sought-after. The Castigationes and the Variae lectiones, which make up 205 pp., independently from the index, have a title dated from 1529. This part had previously been published separately. Sold 17 fr. F. Didot ; 15 flor. Meerman ; 10 fr. 50 c. Boutourlin.” (Brunet)

French Renaissance did not have to discover Virgil as it had to do for many other classical authors: the Middle-Ages had already elevated him to the rank of God, along with Ovid. And it is around 1530, with the neo-Latin explosion, that he will be placed at the top of the hierarchy with Horace, and above Catullus and Terence… A perfect poet, more than Homer since his twelve epic texts managed to condense a whole Iliad and a whole Odyssey, he was also a savant and a professor: his Bucoliques preach civic virtue and the resistance to the whims of passion. In the Géorgiques, the episode with the bees is a description of a well-governed state; in the Eneide, the first six books are an allegorical account of the six ages of man.

The beautiful Colbert copy of Virgil from 1529-1532 with the autographed mention “Bibliotheca Colbertina” on the title leaf.

“Colbert was an able organizer but also one of the most ardent bibliophiles we know of.  Upon Colbert’s death, his library passed into the hands of his oldest son, Jean-Baptiste Colbert, marquis de Seignelay (1651-1690), who became minister of the Navy. He took great care of it and enlarged it under the supervision of Baluze who had succeeded Carcavi.” (Guigard, II, 152)