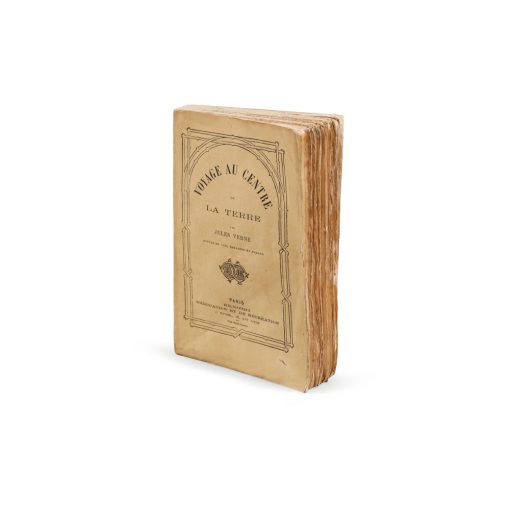 A precious copy in wrappers, as issued.

In wrappers, as issued.

The 12mo edition of Jules Verne’s novels have for the most part remained unknown to bibliophiles.

However, they make up the true first editions.

The importance of this novel is real and Voyage au centre de la Terre established itself as one of the writer’s classics.

From 1863 to 1905, the Hetzel house edited all 54 volumes of Jules Verne’s novels which make up the 64 Voyages extraordinaires.

Second great novel of this series, this book relates the incredible exploration undertaken by three characters (the professor Lidenbrock, his nephew Axel and their guide) from an Icelandic volcano to the center of the earth.

Jules Verne describes the island thanks to his in-depth research based on maps and descriptions. He notably worked a lot with Charles Sainte-Claire-Deville, an eminent French geologist and meteorologist, who brought a scientific outlook to the texts.

A subtle blend of realism and imagination, Voyage au centre de la Terre is full of fabulous descriptions that transport the reader into a lively and fantastic world. This novel is one of the pillars of French literature and one of Jules Verne’s classics.

“These three heroes are among the best created by Jules Verne, psychologically coherent, happily balanced in an opposition full of measure and humor.” (Dictionnaire des Oeuvres)

A beautiful and precious copy of this rare Jules Verne first edition, preserved in its wrappers, as issued.

The true 12mo first editions of Jules Verne are very rare and even more so when preserved in their original state.