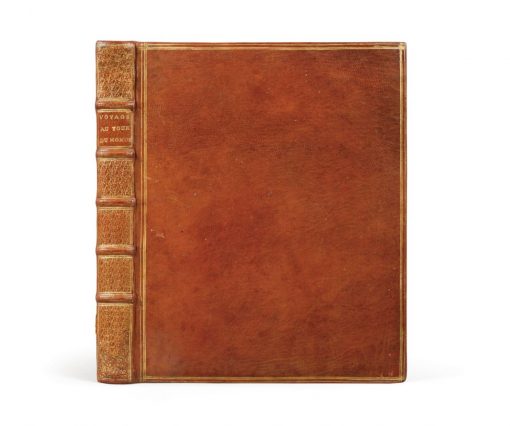 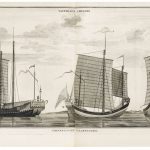 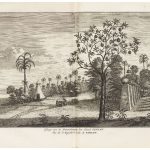 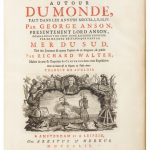 A beautiful and precious wide-margined copy,
preserved in its contemporary red morocco signed by Derome.

The iconography of this French first edition is of very particular interest.

It consists of a great map of the world ( x 236 mm) representing the precise journey of the expedition, with 13 beautifully engraved maps and 21 great folded engravings depicting its episodes and major discoveries.

“No one seemed to be interested in great maritime journeys when, in 1741, admiral Anson made his trip around the world, and its excellent account is now in everyone’s hands; since admiral Anson’s voyage, no other great trip was undertaken for twenty years” (Louis-Antoine de Bougainville).

Baron Anson’s journal was published in 1748 by Richard Walter, Chaplain of Anson. It was translated into French and German the following year and was a resounding success in the maritime world as well as the literary world of the time.

The Baron George Anson, later Lord Anson, one of the top officers of the Navy at the beginning of the Seven Years’ war and vice-admiral of Great-Britain in 1755, was commander in chief of the fleet involved against France.

George Anson’s voyage around the world was aimed to protest the Spanish establishments on the western coast of South America. Anson left Plymouth on September 18th 1740 ; his trip around the world lasted three years and nine months.

The journey was a human disaster. Of the 2000 men who embarked, only 188 came back. But Anson’s triumphant return in Great-Britain, on the 15th of June 1744, on board the only centurion, with a treasure worth 400 000 pounds, earned him tremendous prestige.

“Anson’s narrative of his trip around the world should generate great interest amongst all social classes. Most horrendous are the tragedies his squadron had to endure in order to go around the terrible Cape Horn, the new passage leading from the Atlantic ocean to the south seas, and the details of the fight he had to lead, and the victory which followed, with only one vessel left, against a big Spanish galleon, with one hundred and fifty men aboard. This account is also commendable in terms of geography because of the precious information it contains for other ship captains” (A. Duponchel).

A beautiful and precious wide-margined copy, preserved in its contemporary red morocco signed by Derome.

Very rare in such condition.