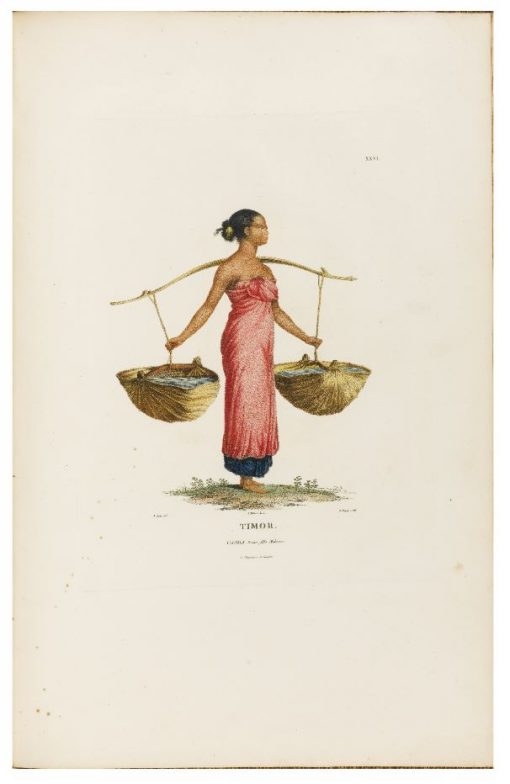 A unique copy of this important first unique edition
offering the first detailed map of Australia.

From a single issue, on very large wove paper
(the copy measures 50 mm more than the royal armorial copy
of the duc d’Angoulême), a state unknown to most bibliographers,
it was sumptuously bound in contemporary morocco
and decorated with the imperial emblem of a spread eagle
with a laurel crown, at the beginning of the reign of Louis XVIII,
an exceptional bibliophilic and historical fact.

A unique copy of this famous first edition sumptuously bound in contemporary morocco and decorated with the imperial emblem: an eagle with a laurel crown in gilt in the center of each of the covers.

The paper quality is of an uncommon luxury in the history of the printed book.

This first edition relates the culminating expedition of the era of the great voyages of the 18th century, offering the first detailed map of Australia.

“Péron’s voyage is one of the most interesting undertakings in the Southern Lands. From the perspective of geographic discoveries and natural history, this book is just as important as Flinders’.” (Chadenat, 148)

“An interesting text, with very nicely executed plates. The part of this travelogue about navigation and geography was published by L. de Freycinet.” (Brunet, IV. 603)

A copy in keeping with the collation given by Nissen (n° 3120), very complete with the two volumes of text and the first Atlas, with title and plates numbered 2 to 41 ; without the second part of the Atlas written by Freycinet in 1811, and decorated with 14 maps. But was it ever printed for this unique imperial copy on large wove paper!

The expedition lasted more than three years, from the 19th of October 1800 to the 25th of March 1804. The objective was the coasts of New-Holland, unknown up to then. Twenty-two of the most brilliant savants of the time participated and more than 2 500 new species collected enriched the collections of the Museum.

A beautiful illustration comprising of a portrait of Péron engraved by Lambert according to a drawing by Lesueur and executed “15 days before his friend’s death”, two folding paintings and a superb atlas containing 40 copper engraved plates, maps and blueprints, of which two engraved titles and 1 folding plate are by Choubard, Cloquet, Dien, Fortier, Houlk, Née, Pillement, Roger… according to the drawings by Lesueur and Petit.

23 plates were colored with a paintbrush by the editors.

In 1800, the Premier Consul gave the order to prepare a scientific reconnaissance expedition of the Southern Lands and in particular the southern coast of Australia, that the scientists charged with this mission under captain Nicolas Baudin called “Terre Napoléon”.

In addition to the important scientific progress brought about by this expedition, a rich gathering of more than 2500 new species came to enrich the collections of the Museum, notwithstanding the thousand or more samples of large and small animal species (Cuvier), making this maritime endeavor one of the most extraordinary of all times.

Freycinet, the commander of the Casuarina, wrote the astronomical, nautical and geographical parts of the journey, published in Paris in 1815, in a 4to volume with a folio atlas containing 32 maps, not included in this unique copy.

Here follows the detail of this important voyage :

“Péron left the Havre on 19 October 1800 on the Géographe. Immediately he bonded with Henri and Louis Freycinet, officers of the Navy, Leschenault, a botanist, Bernier, an astronomer, Depuch, a mineralogist. After a pause in the Canaries and the isle of France, the expedition reached to western coasts of New-Holland, explored Leuwin, Endracht and Witt, and finally accosted on the island of Timor on 18 April 1801.

On 13 January 1802 we reached the southern cape of Diemen, and for three months we explored its southern part and eastern coast. In a series of frequent visits, Péron studied the local and now bygone people of these islands, and we encountered similar people in Nouvelle‑Calédonie. On 29 March 1802, the ship crosses the Strait of Banks, and we began a first reconnaissance of the land of Napoléon, on the south-western coast of Australia. After having explored a large island and after an unfruitful attempt to reach the southern tip of Tasmania, and when there were only four valid men and one officer left, the expedition landed in Port-Jackson on 20 June 1802. Péron witnessed the first developments of this English colony and predicted, in one of his most memorable memoir, its future prosperity.

Then we visited the small archipelago of the Hunter isles; the two main islands are separated by a very narrow strait called the Péron canal. After another stopover on the island Decrès, the month of January 1803 was dedicated to the survey of the gulfs of the Land of Napoléon, to the discovery of the Joséphine islands and the “Géographe”; then, after a stay in the port of King-George, in the first days of March, the exploration took up again with the exploration of Leuwin. During another stay on the “Péron peninsula”, the naturalist whose tale we are following ran into the greatest dangers. He and two of his companions barely escaped the wrath of the indigenous people, and they were only found by one of the ship’s rowing boats after two days of insomnia and starvation; then, after having visited Witt, the expedition returned to Timor and stayed there for the month of May 1803. Some furious winds prevented us from accosting in New-Guinea and entering the Carpentaria strait, and so we came back to the Isle of France where we remained five months. We also took a one month break in The Cape. This is where, tired by his incessant work and an uneven diet, Péron contracted the germ of angina which would bring about his premature death. The ship finally arrived in Lorient on March 25th 1804, bringing back, in addition to an immense collection, a hundred live animals that had never been shown in Europe before. Péron was charged by the minister of the Navy Decrès of publishing with Freycinet his travelogue and the description of his zoological collection.”

A magnificent and unique copy, printed on large wove paper, of great luxury and wide margins, a state unknown to the bibliographers, contemporary bound in sumptuous red morocco with the imperial emblem, an exceptional bibliophilic and historical fact under the new reign of Louis XVIII.