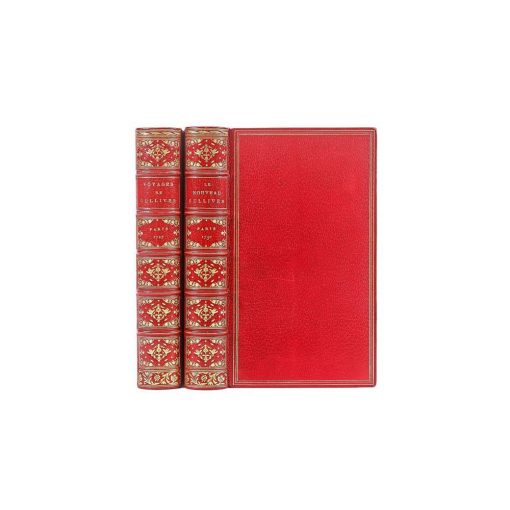 “M. Swift is Rabelais but with good sense” (Voltaire).

A superb copy, with very wide margins,
from the library of Ph. Louis de Bordes de Fortage,
with ex-libris.

A precious reunion of the first published edition in France with the address of H. L. Guérin of Swift’s famous satirical novel and its sequel by the abbot P. F. Guyot-Desfontaines, which is excessively rare.

The first volume is illustrated with 4 unsigned figures in a very beautiful issue.

Anonymously published in England in 1726, this text is one of the major works by one of the greatest English classical writers.

The first illustrations of the Voyages de Gulliver that come with the text are present in the French translations of 1727.

The author had manifested a real interest for them. Swift wrote to his publisher to ask him to insert the engravings in the editions of his novel.

The terrible abbot Desfontaines gave a sequel to the Voyages de Gulliver where Gulliver’s son also discovers an imaginary country: “a country where women are the dominant sex…”

“Voltaire, who was at the time in England, spread their fame among his correspondents in France. (…) Perhaps no work ever exhibited such general attraction to all classes. It offered personal and political satire to the readers in high life, low and coarse incident to the vulgar, marvels to the romantic, wit to the young and lively, lessons of morality and policy to the grave (…). The Voyage of Lilliput refers chiefly to the court and politics of France. (…) Swift has borrowed several illustrations and perhaps the general idea from Rabelais book V, chap. XXIII, where Pantagruel inspects the occupations of the courtesans of Quinte-essence, Queen of Entéléchie. (…) And there was such reality given to his whole person that one seaman is said to have sworn he knew captain Gulliver very well…” (Sir Walter Scott)

“… a vast genius, a magnificent genius, a genius wonderfully bright and dazzling, and strong…” (Thackeray)

A beautiful and precious copy, with very wide margins, preserved in a red morocco binding created by Hardy.