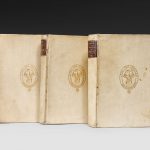 A most esteemed edition, mostly first edition,
of the best description of Persia in the 17th century
decorated with a superb frontispiece and 78 folding plates and maps.

This text was praised by Jean-Jacques Rousseau
and Voltaire and became Montesquieu’s bedside book.

A precious copy preserved in its contemporary vellum
with the arms of Jean Van Volxem, alderman of Ruisbroek in Flanders.

Contemporary vellum with Dutch stitching, lettering piece in brown morocco, stamped arms in gilt in the center of the upper covers, some marginal reparations at 5 ll with no loss of the text, infinite waterstains. Contemporary binding.

First complete edition, mostly first edition, of the best description of Persia in the 17th century. It is decorated with a superb frontispiece and 78 folding plates and maps.

“Le Voyage de Chardin en Perse is one of the most interesting journals published in the 18th century.” (Brunet)

The superb illustrations consist of a frontispiece portrait in the first issue by Thomassin from 1710, of 78 beautiful copper-engraved folding plates and maps, and of 6 engraved ornamental head pieces at the beginning of each chapter.

The artist Grelot accompanied Chardin : all of the scenes and landscapes are drawn from nature.

He travelled twice to the Middle-East, from 1664 to 1670 and again from 1671 to 1677. In 1686 he published in London the journal of his second trip (praised by Bayle) and later, in 1711, published a more complete edition comprising of a very thorough presentation of Persia, with chapters on its literature, history, religion, political life and a detailed description of Isfahan.

“His official position and the knowledge he was quick to acquire of the country’s idioms allowed him to garner heaps of information on Persia. A good artist accompanied him in all his explorations, allowing him to bring back accurate reproductions of monuments, costumes, the ruins of Persepolis. This illustrious traveler managed to gather with intelligence and courage much precious material. His in-depth research, his observations, the curious and authentic information on the history, administration, legislation, mores, science, arts and the ways of the country enabled an unknown place to be revealed.”

“The unanimous testimony of the travelers, says Langlès, who visited and described these same regions after Chardin only served to highlight its accuracy, the depth of its observations, the variety and veracity of its information.”

This text was praised by Jean-Jacques Rousseau and Voltaire and became Montesquieu’s bedside book.

A precious and beautiful copy preserved in its elegant contemporary vellum with the arms of Jean Van Volxem, alderman of Ruisbroek in Flanders.