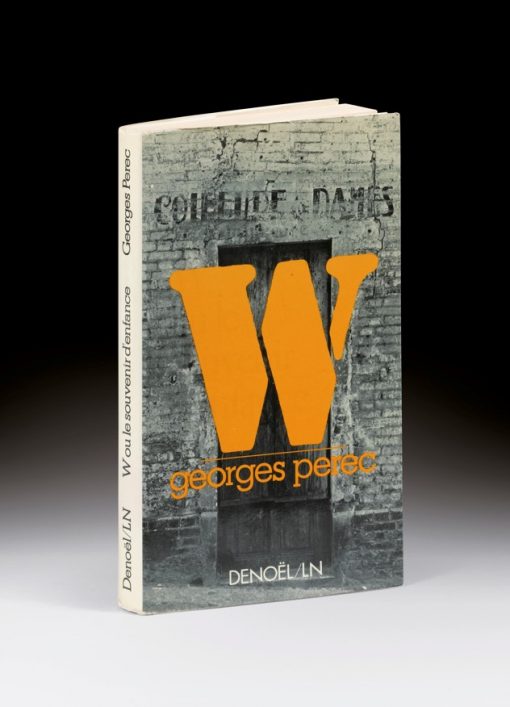 “I write because they have left in me their indelible mark and the trace is the writing:  their memory died in writing;  writing is the memory of their death and the affirmation of my life” (Georges Perec).

An attractive copy preserved in publisher’s wrappers, with dust jacket, with autograph dedication from Perec to the writer Michel Suffran.

There were no large paper printed.

Our copy bears an autograph dedication from Perec to the writer Michel Suffran.

In 1975 is published W or the childhood memory, a hybrid work in which Perec tries to remedy the shortcomings of his memories by writing.

If Georges Perec undertakes to look back on his past, it is because he was strongly marked by the loss of his parents. The disappearance of his family, and the resulting trauma, motivate a writing in perpetual questioning. The lost past is for the writer the engine of a writing that summons fiction more than reality. Indeed, faced with the lack of memories, only the writing of the present can leave a trace of loved ones.

The fiction story that opens the first part is narrated by Gaspard Winckler, a French deserter who lives in Germany under a false identity. One day, a man named Otto Apfelstahl told him that his namesake, a deaf-mute and autistic child, had disappeared on a boat trip around the world to help him heal, around Tierra del Fuego. He offers her a mission, that of saving this child and going to the place of his disappearance. Gaspard Winckler accepts.

Alternated with this beginning of fiction, the second narrative begins with a singular observation: “I have no childhood memory.” (Perec, 1975, 17). It is precisely the lack of memories that generates a research more oriented on the nothingness to be reconstituted. First memories of the writer, built from testimonies and yellowed photos. The memories thus restored are continually subject to doubt, refutation and multiple interpretations, because Perec builds meaning from yellowed photos and scattered testimonies, the only real links between the past and the present. Like his fictional character, Gaspard Winckler, the narrator of the personal story goes in search of his homonym-child, not in the past, but in writing, the starting point of an introspective investigation.

An attractive copy preserved in publisher’s wrappers, with the famous dust jacket illustrated by a photography of Christine Lipinska showing Perec’s mother’s hairsalon.

With an autograph dedication by Perec to the writer Michel Suffran.

In addition to his profession as a doctor, Michel Suffran (1931-2018) devoted himself to literature.

A friend of François Mauriac, Bernard Clavel and Jean Vauthier, Miche Suffran was the author of plays and many radio and television dramas, as well as literary studies and essays on writers.

Eugene Ionesco wrote: “Dazzled, even more anguished, by the book of Michel Suffran: The Night of God. How is this writer not more and better known?”