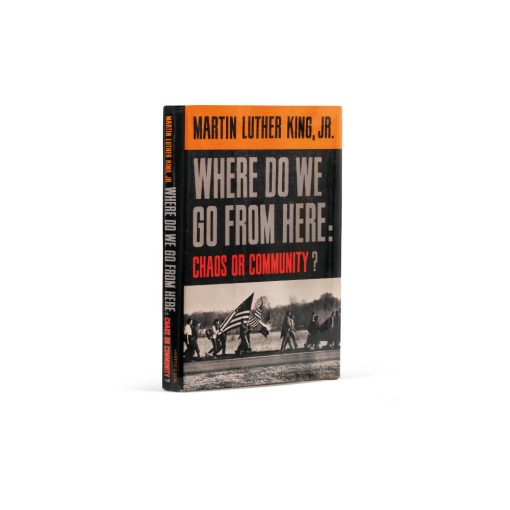 “The glowing spirit and the sharp insights of

Martin Luther King Jr. are embodied in this book.

I hope that it will be seen as a testament” (Coretta King).

First edition of Martin Luther King’s last book.
A copy signed and kept in its original
publisher’s cloth binding, as new, as issued.

Where Do We Go from Here is Dr. King’s analysis of the state of American race relations and the movement after a decade of U.S. civil rights struggles.

King believed that the next phase in the movement would bring its own challenges, as African Americans continued to make demands for better jobs, higher wages, decent housing, an education equal to that of whites, and a guarantee that the rights won in the Civil Rights Act of 1964 and the Voting Rights Act of 1965 would be enforced by the federal government.

Dr. King wrote this book during a reclusive trip to Jamaica in early 1976.

The work reflects on the previous decade of the Civil Rights Movement and next steps. The text is partly based upon his August 1967 address as President of the Southern Christian Leadership Conference. In it, Dr. King addresses issues raised by race riots, white backlash, and the assassination of James Meredith (1966),and while giving faith that “the yearning for freedom eventually manifests itself.”

“First and foremost was my recollection of how determined Martin was to be fully and creatively engaged with the living history of his time, a history he did so much to help create but also a dangerous and tumultuous history that shaped and transformed his own amazingly brief yet momentous searching life. From this position of radical engagement it would have been relatively easy for King, if he chose, to confine his published writing to telling the powerful stories of the experiences he shared almost daily with the magnificent band of women, man and children who worked at the black led Southern freedom movement, recounting how they struggled to transform themselves, their communities, this nation and our world. Instead, going beyond the stories, King insisted on constantly raising and reflecting on the basic questions he posed in the first chapter of this work: “Where Are We?” and in the overall title of the book itself: ”Where do we go from Here: Chaos or Community?” (Always present, of course, were the deepest questions of all: Who are we? Who are we meant to be?). Sparked by the young men of Watts, informed by the streets he walked in Chicago, inspired by the magnificently ordinary organizers and community members who faced white rage and fear-filled violence in the Windy City and its suburbs, King was constantly teaching, learning, urging, admonishing – reminding Americans not only the powerful obstacles in our histories, our institutions and our hearts, but also calling our attention to the amazing hope represented by Thomas Paine, one of the few really radical, grassroots-oriented ”founding fathers”, who dared to proclaim” We have the power to begin the world over again”. I rejoice to consider the strong possibility that this King had opened the way for Barack Obama.”

When the late Coretta King wrote her brief and thoughtful preface to the post-assassination Beacon paperback she closed with these words:” The glowing spirit and the sharp insights of Martin Luther King Jr. are embodied in this book. The solutions he offered can still have our society from self-destruction. I hope that it will be seen as a testament, and that the grief that followed his death will be transmitted to a universal determination to realize the economic and social justice for which he so willingly gave his life”. (Vincent Harding).

A very nice and bright copy, signed and kept in its original publisher’s cloth binding, with its original dust jacket, as issued.