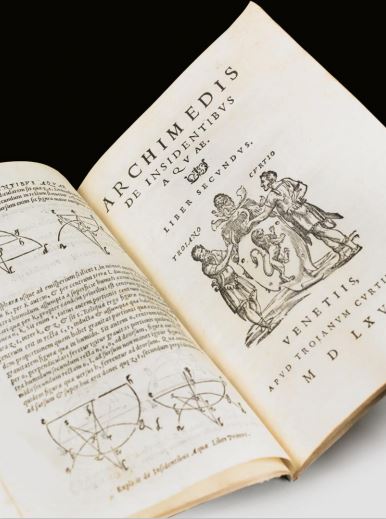 Two parts in one volume, small 4to of ff. (6), ff. (16), printer’s device on titles, woodcut diagrams in text (a little light browning and spotting).

Very rare first complete edition of Archimedes’ On floating bodies, published by Curtius Trioianus from the legacy of Niccoló Tartaglia (1499-1557), which includes the eponymous ‘Archimedes’ principle’ of buoyancy.

“Archimedes − together with Newton and Gauss − is generally regarded as one of the greatest mathematicians the world has ever known, and if his influence had not been overshadowed at first by Aristotle, Euclid and Plato, the progress of modern mathematics might have been much faster …

In hydrostatics [Archimedes] described the equilibrium of floating bodies and stated the famous proposition – known by his name – that, if a solid floats in a fluid, the weight of the solid is equal to that of the fluid displaced and, if a solid heavier than a fluid is weighed in it, it will be lighter than its true weight by the weight of the fluid displaced” (PMM, p. 44).

For his edition of On Floating Bodies, Tartaglia used a Latin translation, from a now lost Greek text, by Flemish Dominican William of Moerbeke (1215-86) (Moerbeke’s holograph remains intact in the Vatican library, Codex Ottobonianus Latinus 1850).

“Tartaglia was a crucial figure in the Archimedean and pseudo-Archimedean tradition on floating bodies … Tartaglia did not merely publicize Archimedes’ work on floating bodies, he also hinted at an extension of Archimedean doctrines to the study of motion. Tartaglia was not the first to try to extend Archimedean doctrines. Marshall Clagett identified a tradition linking hydrostatics and speed through a fluid including Leon Battista Alberti, for example. There are some obvious analogies between [Guidobaldo] dal Monte’s approach and Tartaglia’s strategy of relying on known domains to explore new ones, but whereas dal Monte used geometry and sought rigorous foundations, Tartaglia adopted a looser approach whereby Archimedes served more as a source of inspiration than as bedrock of rigor. Tartaglia was the teacher of Benedetti and probably of Ostilio Ricci, mathematician to the Grand Duke of Tuscany and Galileo’s teacher. Both Benedetti and the young Galileo were familiar with Tartaglia’s work and attempted to use Archimedean hydrostatics in formulating a mathematical science of motion opposing Aristotle’s views” (Meli, p. 47).

“Since centers of gravity and floating bodies were precisely the problems of mathematical physics to which Galileo first directed his attention, it can hardly be questioned that he began his study of Archimedes with Tartaglia’s edition” (Drake 2003, p. 4).

Book I, the shorter and more elementary of the two, had been published by Tartaglia in Latin in 1543 as part of his Opera Archimedis, and in Italian translation in 1551 as part of the Ragionamenti sopra la sua Travagliata inventione, but this is the first appearance of the complete work. A second, independent, version, based on the same Moerbeke manuscript and edited by Federico Commandino, appeared in the same year. OCLC lists Yale only in US.

The transmission of Archimedes’ works to the Latin West in the Middle Ages depended on two Byzantine Greek manuscripts, known as A and B, of which only Codex B, dating from the 9th century, contained On floating bodies. Both of these were available to Moerbeke, who made his Latin translations in 1269. The great Opera of Archimedes published at Basel in 1544 was based upon Codex A, and so did not include On floating bodies, Codex B having disappeared some time in the fourteenth century (Codex A itself disappeared in the 16th century, although a copy is preserved in the Laurentian Library in Florence). No Greek text of On floating bodies was therefore available to Tartaglia or other Renaissance scholars. Indeed, this remained the case until the 20th century, when a third Greek manuscript, C, dating from the 10th century, was identified by Heiberg in 1906 at Constantinople (where it had been brought from Jerusalem). Codex C contains On floating bodies, as well as other works, notably the only extant manuscript On the Method of Mechanical Theorems, hitherto known only by hearsay.

“Tartaglia’s manuscript of the Moerbeke Archimedes may have been taken to him in the autumn of 1539 by Don Diego Hurtado de Mendoza, when Mendoza went to Venice as ambassador of Charles V of Spain, remaining until 1546. The manuscript from which Tartaglia published the 1543 edition … is preserved at the National Library in Madrid (MS 9119). Mendoza was a pupil of Tartaglia’s … Since it was to Mendoza that he expounded the science of weights, using for that purpose treatises that are bound together with the Madrid manuscript, it is possible that Mendoza brought the manuscript to Venice, or acquired it there; that he took it to Tartaglia for discussion and explanation; and that he returned to Spain with it after allowing Tartaglia to use it and perhaps to copy from it. But there is also internal evidence that the same manuscript, or an extraordinarily faithful copy of it, was used at Venice in 1565 for the printing of Archimedes’ On bodies in water (of which the second book had been omitted in the 1543 edition)” (Clagett, p. 23).