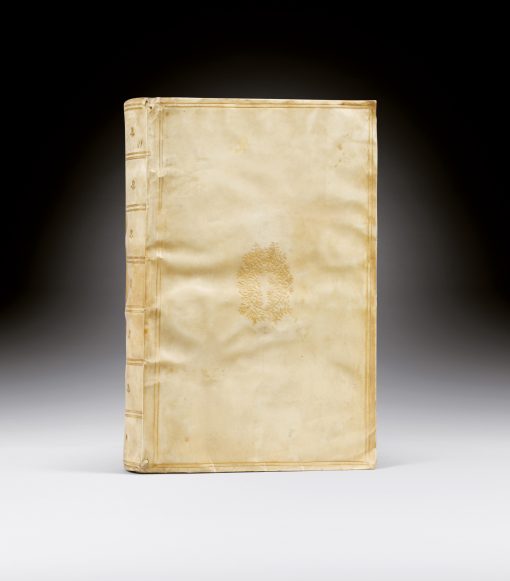 Greek and Latin, two parts in one volume, folio, historiated woodcut initials, woodcut device on the title, contemporary limp vellum, flat spine gilt in compartments divided by double rules and centered with a fleuron, the title in manuscript in the top compartment, the sides centered with a laurel wreath in gilt and with a gilt double-fillet border, gilt edges.

Editio princeps of the fragments from books VI-XVII of Polybius’ Histories, with Latin translation by Wolfgang Musculus, and second edition of books I-V, reproducing the Latin translation given by Niccolò Perotti in the early 1450s.

This edition was committed to the Basler printer Johannes Herwagen (Hervagius) by Arnoldus Arlenius Peraxylus (c. 1510-1582), a Dutch humanist and a librarian to the Spanish ambassador in Rome, Diego Hurtado de Mendoza, to whom the work is dedicated.

As Peraxylus says in his dedicace to Mendoza, the Greek text of books VI-XVII was transmitted by a collection of abridged fragments that he had found in his master’s private library, the so-called Excerpta Antiqua. Since Mendoza’s manuscript was lost in the Escorial during the fire of 1671, the 1549 edition is now the only source for its readings.

Polybius (c. 200-120 BC) was the most important and influential Greek historian of the Hellenistic Age. A leading politician in his own homeland and a man of war before being a historian, Polybius was deported in Rome in 167 BC as a detainee, after the Third Macedonian War. On that occasion, he became a friend and a counsellor of Scipio Aemilianus, the nephew of Scipio Africanus.

All over the 40 books of his Histories, mostly written during his Roman stay, he narrated as an eyewitness the sudden rise of the Roman State to the dominion in the Greek and Hellenistic World.

With this work, he acted as a political and cultural mediator, aiming at providing both the Greeks and the Romans with a useful tool for mutual understanding.

« Writing in the mid-second century BC, Polybius had set out to explain to his fellow Greeks by what means and under what system of government, the Romans succeeded in less than fifty three years [220-167 BC] in bringing under their rule almost the whole of the inhabited world, an achievement which is without parallel in human history. Thirty books followed on the formation and the growth of the Roman Empire, subsequently extended by a further ten books in order to accommodate the years 167-146 BC » (Kempshall 2011, 509).

Polybius was highly appreciated during the whole Antiquity for his accuracy, for the rigour of his historical analyses, and for his first-hand political and military experience. As a consequence, it was largely read and praised by Greek and Roman authorities like Cicero, Livius, and Plutarch, and soon imposed itself within the canon of Classical historians.

« Polybius was rediscovered in Florence as a historian of the first Punic War by Leonardo Bruni about 1420. Though he had been translated into Latin by the middle of the fifteenth century, his reputation as a historian and as a political thinker does not seem to have been widely diffused. It was in Republican Florence, too, that the importance of his Book VI was recognized for the first time by Machiavelli and others at the beginning of the sixteenth century. Polybius’ reputation soared rapidly in the second part of the sixteenth century. His fame was based on his expertise as a military and a diplomatic historian » (Momigliano 1974, 3).