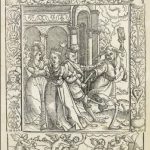 « A series of 40 woodcuts by Jost de Negker, which are free and enlarged copies after Hans Holbein the Younger’s « Dance of Death » series, with exception of the first two leaves, all leaves with woodcuts on verso and German letterpress on recto, both text and images in decorative woodcut borders, the woodcuts with traces of colour and with a titlepage (mutilated, the text partly cut up and rearranged), mounted and in modern binding ; fourth edition, published in Leipzig by David de Negker. 1572

The BL holds an imperfect, coloured copy of the 1544 Jobst Denecker (Jost de Negker) edition, C.43.d.3. A comparison of that and the 1572 edition would confirm that the woodcuts are by Jost de Negker (as stated by Hollstein), and not by David de Negker (as stated by Paisey). The 1544 edition appears to have two woodcuts with inscriptions (fol.F2 verso with date ‘1542′ and fol.D3 verso with monogram ‘HVE’, see Dodgson, II.207), which, however, this edition does not have.

The original woodcuts for Holbein’s Dance of Death series were cut by Lützelberger. » B.M.

Jost de Negker (c. 1485-1544) was a cutter of woodcuts and also a printer and publisher of prints during the early 16th century, mostly in Augsburg, Germany. He was a leading « formschneider » or blockcutter of his day, but always to the design of an artist. He is « closely tied to the evolution of the fine woodcut in Northern Europe ». For Adam von Bartsch, although he did not usually design or draw, the quality of his work, along with that of Hans Lützelburger and Hieronymus Andreae, was such that he should be considered as an artist.

Some prints where the designer is unknown are described as by de Negker, but it is assumed there was an artist who drew the design, although it has been suggested that de Negker might fill in a landscape background to a drawing of a figure…

On Maximilian’s death in 1519, the large teams assembled for his projects dispersed, and de Negker became as much a publisher as a cutter, retaining many blocks by Burgkmair, Hans Weiditz and others and infringing many works such as the Dance of Death by Holbein, Lützelburger’s masterpiece as a cutter. Negker’s edition of this was published in 1544, and is his last known work.